I adore books about rock stars falling in love with “regular” people, so when you submitted Face the Music to Dear Author, I knew I had to request it. What I found was a frustrating combination of an extreme (and distressingly inert) Mary Sue heroine, a slow-moving plot, and an authorial voice that I actually liked. 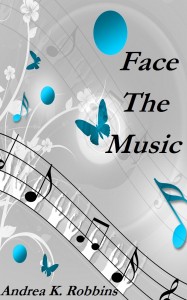 When Allison Banks arrives at her boyfriend’s apartment to find it packed and him getting ready to leave without telling her, she’s somehow surprised and unsurprised at the same time. She had no idea Paul was as unhappy as he was, but at the same time, her life has been one moment after the other of dealing with blows to her pride, so why would this be any different? Allie lost her mom to a car accident three years prior, and has been living with her younger sister, Emily, and Mollie, her young niece. She was a teacher, but found that the job didn’t pay enough for her to make her bills, so she’s taken a job tutoring the young contestants on the reality show, Superstardom, to make ends meet. Superstardom is much like American Idol, in that there are a variety of contestants competing for the $1 million prize and a big time recording contract. One of the contestants is Chris Knots, a gorgeous singer who Allie has taken to fantasizing about. Chris stops by Allie’s classroom one day ostensibly to meet up with one of her student’s Sam, but really, it’s to get a look at the hot teacher everyone is talking about.

Yes, Allie is that hot teacher. She is unsure of herself and socially awkward, but of course, she’s also gorgeous and sexy and has no clue of it (seriously, how she doesn’t know is beyond me, every guy she meets pursues her). Allie dismisses Chris’s visit as no big deal, and is confused as to why he keeps coming around. She’s floored when he asks her to dinner, but of course she accepts. In the mean time, her young student, Sam, has an older brother, Jake, who would really like to be more than friends with Allie. She’s strictly in the “friend zone” with him, but he makes naughty jokes and teases her, and continues to ask her out, even though she’s tried to explain to him as gently as possible that she’s not interested. Jake is trying to date Allie, Chris is trying to date Allie, and she thinks neither of them is really interested.

I had a number of issues with the book, starting with Allison, who reminded me very much of Anastasia Steele from the 50 Shades of Grey books. She’s naïve; a bit petulant, prone to run off when she doesn’t want to deal with a situation, and of course, completely gorgeous and clueless with it. She runs from confrontation about three times in the book which I found very frustrating. The main thrust of the plot (once it got going) was that Chris is going to be a Superstar, and Allie is just a regular person. So in her mind, there’s no way that the two can be together. But solidly 60% of the way through the book, it was still unclear whether they were a couple. They were mooning over each other, but really never having had any physical contact, beyond a kiss. Both at one time or another run from a conversation where they could have clarified the situation between them and once they do decide to be together, it’s no time before Allie is ending things again. She seemed far too immature to handle an adult relationship, let alone one where her boyfriend is famous.

I found her constant dithering and bad decision making to be off putting to the point where I really hoped she didn’t end up with Chris. And when they finally received their Happily Ever After, I was absolutely NOT convinced that she’d grown enough to handle his fame and all that came with it. In fact, I’d bet against them staying together. I don’t believe that was your goal when writing the book.

My other issue is that the plot meandered, with the small details of Allie’s life described with no discernible purpose. She’s got a busy life, but not necessarily an interesting one. Her day to day life was described in far too much detail, and there was little to no urgency within the story. There was actually a time while I was reading the book where I thought, “My life is more interesting than this chick’s.” While I like a first person narrative, if the person isn’t an interesting one, it feels like slogging up a hill to read their innermost thoughts.

The thing that kills me about writing this review is that even though I really didn’t like the heroine of the story, and I felt that the plot needed a lot of tightening up, I really like your voice. The book is written in the first person, but I felt you did a good job of describing the other characters, and Chicago, where the book is set. I think that you have a solid hand at dialogue, and while I wish that the characters’ relationship had moved forward faster, once it got going, I thought that you built a pleasant connection between them. I realize that this seems like I damning the book with faint praise, but I’d be happy to read something else by you. I felt that this book had an immature heroine who I disliked and a plot that wandered which means I find that I’m unable to recommend it. I give Face the Music a D+.