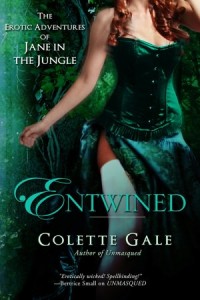 Entwined is the first of the series. It starts with Jane Clemons, her father the professor, and Effie, Jane’s servant/companion. Jane’s fiance disappeared years ago into the jungle, and they have returned to Madagascar to look for him or his remains. Also accompanying them is Kellen Darkdale, who was last with Jane’s fiance. These characters are straight out of a bad Disney cliche pile. Darkdale, who is clearly a villain based on the name alone, is the lecherous hunter who tries to rape Jane whenever she has a moment to herself. Jane’s father is absent minded and barely there, mentally. Effie? She is described as blond but talks like Mammy. I don’t know what to think.

They arrive in Madagascar, Darkdale tries to rape Jane in her room, and she is saved by Tarzan. Then, despite the rape attempt, she tells no one, just chalks it up to poor judgment on Darkdale’s behalf. Meanwhile, she lusts over Tarzan and lets him fondle her breasts. Later on, she’s swimming on a pool and gets tangled on some vines and Tarzan is there to retrieve her again, after some heavy petting.

Tarzan (though he is never refferred to as that in the books) is charmingly adorable. He’s shy. He stops touching Jane when he misinterprets what she wants. He finds her beautiful but doesn’t know how to be around a woman. I loved seeing him on the page and thought you did a great job with him. By the time this short novella left off on a cliffhanger, I bought the next one. So far, so good. Despite the goofy caricatures and the fact that Jane pays not a bit of attention to Darkdale’s rape attempts, I enjoyed it. B for Entwined. 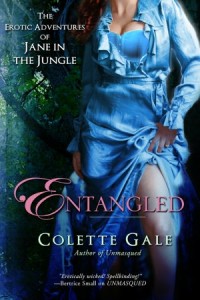 Entangled is where you jump the shark, and then you take it out back and shoot it, and then you back up the car and run over it one more time. How did things go so wrong from one story to the next? These are short tales, so I tried not to give too many spoilers to the first one, but I feel obligated to lay it all out on the table for #2. Here we go. If you don’t like spoilers, stop reading right here.

[spoiler effect=”blind”]Entangled picks up where Jane’s fiance, Jonathan, returns. Jonathan has been living with natives for the last few years. Immediately after reuniting with happy Jane, he takes her in the back so they can get reacquainted. As in, he pulls out his penis and shoves it into her mouth so she can blow him. I’m already tired of Jonathan at this point. Jane seems to be too, as she’s bored while blowing him and entertains herself by imagining Tarzan.The next evening, Jane’s father is occupied with his research so Jane wanders off into the jungle with her fiance. He lights up the equivalent of a jungle-joint over a lamp and makes Jane breathe in the smoke. When she’s high, they make love in a hot spring in the middle of the jungle. Jane’s tripping on pheromones and smoke, so she almost doesn’t notice the surprise of Kellen Darkdale taking her up the ass. I am so uncomfortable at this point. Jane doesn’t want Darkdale, but she’s drugged and her fiance is telling her that she’ll like it, so she lets Darkdale have her ‘other’ virginity. She wakes up later and is upset at Jonathan over what happened, but it seems that he promised Darkdale that he could do a three way with Jane if Darkdale brought her to Madagascar, and too bad for Jane. Jane is a little miffed but she enjoyed that ‘dark pleasure’ so she keeps her unhappiness to herself.

I am outraged, as the reader. You just raped and drugged the heroine and let the raping villain from the first story have her in the back door? I am appalled. I realize these are erotic adventures, so if Jane wants to spread her wild oats across Madagascar, so be it. If she wants to sleep with twenty men, so be it. But I did not sign up for rape and surprise-anal. To make matters worse, Jane is only mildly bothered by any of this. There go my hopes of her taking a machete to their penises in the next installment.

Some plot things happen, and Jane is spirited away by Tarzan to his jungle hideout, which seems to have been inspired by the Disney movie. She sleeps, exhausted.

Next, we are treated to a rather unsexy scene between Effie-Mammy and the Professor Dad, who possesses an enormous purple-headed rod. You’re welcome for that mental image.

Then, she wakes up and there’s another sweet scene with Tarzan that moves to sexy. I am increasingly disappointed that this story is not just about the two of them. They have sex, and Jane passes out again. When she wakes up, she is back in her own bed. Her fiance is relieved she is back, and they go walking in the jungle again. She is soaking in a hot spring when the fiance disappears, and she gets out of the water only to find that they have been discovered by spear wielding savages. The savages poke and prod naked Jane, and take both Jane and Jonathan back to their village. Jane is imprisoned in a hut, but not Jonathan. He decides that night that he will come by and comfort Jane, which involves fondling her and having sex with her while she’s tied up and captive. What a sweet prince of a man.

You also have an uncanny knack for describing things in an incredibly unsexy way. I find this baffling as you are an erotica writer.

Her quim burgeoned, swelling and filling, throbbing like a huge organ between her legs.

His tongue thrust boldly into her mouth, startling Jane with its abrupt invasion. But his kiss was sensual and thorough, and before long, her insides became soft and wavery. Their mouths smashed and slipped together, tongues tangling and teeth nibbling in desperation to make up for their lost time.
That sounds more like a feeding frenzy.

Overall, I’m not convinced. You can write in an entertaining way, but I want Jane to be an active participant, not just a receptacle. Tarzan is likeable enough, but he’s not on the page very often. Everyone else in the story repulses me and when they’re not actively repelling me, I find this entire set-up uncomfortably like fanfiction of the Disney movie. As self-published books go, the covers are appealing and the content is very clean and readable.

In addition, $2.99 for 80 pages would not bother me too much if it was a complete story. But $6 for two chunks of a larger story? And I’m left at the end with no resolution and a rapidly devolving plot? All I can say is thank goodness that Amazon lets you return books.

B for the first one. D for the last. A very grudging D.

→ DA_January
Previous article: Eliminating DRM Is the Greatest Competitive Hammer Against Amazon
Next Post: The BookPushers on Blogging and Books