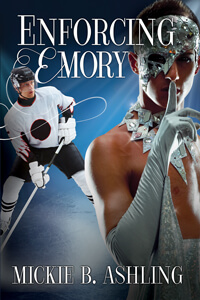 Olympic figure skater Emory Lowe falls in lust the moment he lays eyes on his new neighbor, hockey player Nikolai Vetrov. On the surface, Nik is a typical badass enforcer, intimidating and dangerous, on and off the ice. The only son of Ukrainian immigrants, Nik has been groomed from childhood to fulfill his father’s dreams of seeing him in the Hockey Hall of Fame. Igor guides his son toward that goal with a controlling—and abusive—hand, steering him clear of anyone who might ruin his chances.

Although Emory is the US National Figure Skating champion, he’s in-your-face gay, and his audacious persona rubs Nik and his family the wrong way. Raised by supportive and loving parents, Emory is Nik’s polar opposite in every way but one—his desire to succeed. Underneath the fluff and glitter beats the heart of a fierce competitor, and this side of Emory’s personality begins to close the distance between the two athletes.

While the attraction is one-sided in the beginning, Nik finds himself responding to Emory’s flirting. But before the incongruous pair have a chance at any sort of relationship, they must survive the pressures of career, separation, and most importantly, Igor’s ruthless homophobia.

I feel that this book should come with a special warning: Beware of ugly stereotypes of Russian/Ukrainian people being introduced and reinforced.

“Just my fucking luck,” Tom Lowe muttered as he stood in front of the screen door.

“What’s up, Dad?” Emory asked, taking his eyes off the TV for a second.

“A bunch of fucking communists are moving in the neighborhood”.

Emory sees Nick and of course is attracted to him, as happens in many romances – he doesn’t fall in love without talking to him, thank goodness, but he immediately and definitely likes what he sees.

“I’d climb this comrade in a second”.

His dad, however, keeps talking.

“Dealing with your orientation is one thing, but listening to you drooling over a guy is another matter entirely. And furthermore,” Tom added, turning back to watch the progress across the street, “don’t even think about hooking up with anyone who speaks with an accent. If ya gotta be gay, pick some white boy to do the nasty with.”

Emory shook his head before heading back to his cozy spot in front of the TV. “You’re too much,” he muttered, grabbing the remote. “A gay-friendly bigot. It doesn’t even compute.”

“Love is hard enough to manage without throwing culture and religion into the mix.”

“They’re not speaking English, or were you too caught up in that young man’s body to notice?”

Emory smirked. “I got brain freeze after seeing those arms.”

I do not even know where to start. Maybe with the observation that to some people (and not just of my heritage; needless to say, I get annoyed when any group of people is portrayed in such a stereotyped, horrible way) for whom English is not a first language it can strike a serious nerve when somebody talks down to them based on the way they talk. At my job I earn a living by talking (and writing). I cannot tell you how scared I was that nobody would understand me because of my accent. I wanted to tell Emory’s father to shut the hell up.

The worst thing is that I did not feel his comments were ever seriously refuted. I mean yes, Emory kindly and jokingly calls him “a gay friendly bigot” and Tom is gay friendly, he loves his son and always supported him, moreover eventually he makes Emory’s lover part of the family, but his comments were just there.

And even when his wife tries to say something, I felt that the narrative kind of dismissed her interference.

“His mother, the teacher, was being true to form. Following rules was part of her life. She was very familiar with immigrant parents who dropped the discrimination card at every turn, whereas his dad was an electrician, member of the largest union of electrical workers in the state, born and bred on Chicago’s tough South side.” “Dropped the discrimination card at every turn” does not exactly sound to me as respectful of many immigrants’ struggles.

Emory is apparently a brilliant figure skater who is extremely talented and also flamboyant with his choice of outfits and music while he dances. He won the nationals and now he has a place on the Olympic team. The story takes place before, during and after the Sochi Olympics, by the way. We also learn in the beginning of the story that Emory’s coach suggested he should spend some time before flying to Sochi with a famous Russian coach to make sure Emory comes to the event in top shape.

I am going to jump ahead a little bit and inform you that of course Emory did not click with his coach. Hey how could a Russian coach, of all people, teach him something new, right?

“What did he do?” Nik couldn’t imagine anyone not liking Em.

“It’s what he doesn’t do,” Emory complained bitterly.

“He’s not good at positive reinforcement.”

“I thrive on praise,” Emory admitted. “A pat on the back is way more effective than a muttered Russian expletive.”

“You don’t need to love the guy, just learn as much as you can,” Nik advised.

“There has to be mutual respect,” Emory said sincerely. “He needs to realize that if he wants to be effective.”

“He’s not teaching me anything new,” Emory scoffed. “Yuri is only fine tuning what I already know.””

I want to talk about Nik and Emory. Fast attraction notwithstanding I thought they were good together. As I said in the beginning, I really liked Emory and I thought Nik’s realization that he was gay was handled well. It is not exactly a GFY story, I do not think – Nik always fought his attraction to men and he was reasonably confident that he was attracted to women as well, so I guess this is a story of a realization that he was not a closeted bisexual, but gay?

Nik’s homophobic bastard father was the main villain of the story. Would I have any problem with him being a homophobe? Of course not! But once again I had the feeling that Igor being a Ukrainian immigrant as well as a homophobic criminal was tightly connected and I resented that a lot.

The story just won’t let me forget the “message” of it. Tiny things like Nik’s sister getting internet in his apartment when he still did not have an internet by “piggy-backing” on his neighbor’s Internet (of course!) and

The whole nation really? A nation with awful homophobic laws certainly, but isn’t that a sweeping generalization right there?

And there were some not so tiny things, like a certain event at 72%. My book buddy warned me about it, thank goodness, otherwise I fear my Ipad would not have survived it.

I cannot tell you how happy I was when this book ended.
Grade D.