I am a big fan of the Guardians of Ascension series and I was excited to see another volume from you despite it being in a different world. Unfortunately, the quality of the writing in this self published novella (or published with the help of an agency) is just not as strong as it is in the traditionally published series. There is a combination of poor copyediting along with poor content editing which made for a confusing and stuttering read.  While not a part of the Ascension world, this story borrows heavily from elements contained in the Ascension world (as if it is almost Ascension fan fiction) 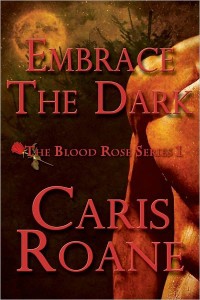 There are two parallel realms as in the Ascension series. The second realm is the paranormal one with wraith pairs that wreak havoc on the Nine Realms of North America.  The wraith pairs are the evil that the faeries, vampires, trolls and other paranormal creatures fight.  Mastyr Vampire Gerrod is the ruler of Merhaine, one of the Nine Realms and he has an attraction for Abigail Kirkland, a human baker.  I think this is billed as an erotic romance but it wasn’t any spicier or more explicit that the traditionally published works (or kinkier because what could be kinkier than a vampire who tongues the flesh of tangerines pretending it is his mate’s sex, see for exampleWings of Fire)  At one point, Gerrod mentions that Abigail tastes like rosemary (the characters all have smells in the Ascension series which practically translates into “by their smell you shall know them”).

Vampires aren’t supposed to mate with humans.  It is akin to taking forest gremlins to bed, but Abigail is able to speak telepathically to Gerrod; she can tune into his frequency and stir his mating frenzy.  Gerrod does not want to respond to her for she is too weak to survive in his realm and his people would not accept him taking her as a mate.   Abigail has always thought Gerrod has disliked her and she has tried to stay away from him.  Seeing him fight the wraiths stirs something in her.

The major story arc concerns Gerrod’s softening not just toward Abigail but toward life in general.   The romance is very familiar and jumps from hate to lust to love quickly even for this lengthy novella.  But the weak story is combined weak, unpolished writing.  There are several awkward sentences. “Of course” and many other bridges are inconsistently punctuated, sometimes with commas sometimes without. Northern Realm was sometimes capitalized and sometimes not.

The story had blatant inconsistencies, often within the same scene. After a wedding that Abigail has provided food for a troll comes up to her.  Abigail knows that trolls can’t keep a secret.

In fact, the saying among realm was that if you kept a secret like a troll, it meant you never kept a secret, that you couldn’t keep a secret if your life depended on it.

The troll tells her that the hero loves her even if the hero treats her poorly.  She immediately starts confiding in him, this total stranger whom she knows has no compunction about gossiping far and wide:

He met his gaze once more. Because she wanted to understand the position of the castle staff, and especially Gus’s take on the subject, she said, “Gerrod kissed me this evening.”

Gus’s eyes went wide. She couldn’t help but laugh. She knew his gossipy kind well, but she also knew something else. He was a wise troll and she trusted him, so she added, “I kissed him back.”

Even the voice, the crazy and confident nature of the writing of the Ascension series, was missing here.  I’ll definitely be picking up the next Ascension book but this self published effort was definitely a step down in quality.  D