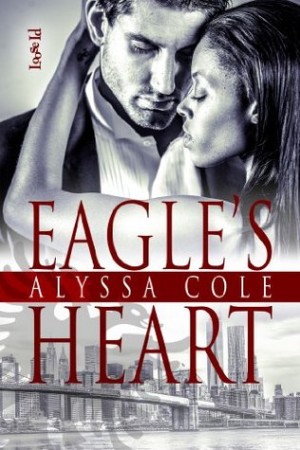 Salomeh Jones is a Brooklyn high school teacher whose attempt to aid an abused student ruins her career and puts her life in jeopardy. Julian Tamali is a special agent hot on the trail of the Albanian mafia boss responsible for a slew of crimes, including the death of Julian’s family. When Julian finds a connection between the mafia boss and the disgraced school teacher, he sets into motion a series of events that will change their lives forever.

A night of pleasure throws them into a deadly game of cat and mouse with the man who has kidnapped Salomeh’s student and is possibly providing weapons to terrorists. Caught in a web of passion, danger, and betrayal, Julian and Salomeh must stop the mafia boss or forfeit their chance at redemption–and their lives.

We’ve been talking a lot in Romancelandia lately about diversity and when I saw this one tweeted by Suleikha Snyder I went and had a look.  Most of the “gang” books I’ve read (not that there have been terribly many) have been about motorcycle clubs and the heroes there are different in that they’re often criminals.  I liked the idea of a gang book where the hero was an undercover agent – there’s no conflict about who is the good guy here.  (I was mistaken in one respect – Julian Tamali is not undercover at all.)  I also liked that the main characters were racially diverse and that the cover reflects that – although Salomeh’s hair was curly in the book.

I’m trying to include more diversity in my reading but when it comes down to it, those things in themselves won’t make me like a book.  It’s down to the story and the characters.  Here, unfortunately, I found the heroine boarded the too-stupid-to-live train and pretty much stayed right on it till the end of the line.  Salomeh is a high school teacher.  She is involved in mentoring programs and is very dedicated.  When one of her students (whom she feels as close to as a daughter – which surprised me and not in a good way) is being abused by her mother and her mother’s boyfriend, Salomeh reports him to the police.  Unfortunately, the boyfriend, Alexi, works for Albanian gang boss, Bardhyn.  Bardhyn has cops all over the place in his pocket and Salomeh’s allegations go nowhere.  Instead, the book opens when she is told that there are allegations that she molested her students being made against her and she is suspended.  She is hounded by the media who are after a salacious story and even though the charges are dropped, her career appears to have been utterly ruined.  At one point Salomeh thinks

How exactly would she explain that she might pop up in his local child-predator registry?

I’m hoping this was hyperbolic thinking because she was never convicted of any crime and so would not be appearing on any child-predator registries.

Julian hears about a teacher whose career has been ruined by Bardhyn, former BFF and the man he’s been trying to put away for years.  Looking Salomeh Jones up online and then doing FBI-type searches about her, he falls instantly in lust (Salomeh looks awesome in a bikini).  He does plan to interview her regarding her knowledge of Bardhyn but it happens that they are at the same 4th of July party where he fails to tell her he is an FBI agent.  They do have a connection and the banter between them at the party and the way they clearly spent a lot of time talking with each other made the attraction between them understandable and obvious. This was one of the strongest sections of the story.

When Salomeh finds out who Julian actually is, she is angry, hurt and betrayed but pretty soon she finds he is the only one she can rely on as the bullets start flying.  Julian does give fairly good apology about the deception and from then on he is honest with her.

Yelena, the girl at the heart of the allegations has disappeared and Salomeh fears for her safety.  Despite the fact that Salomeh is a school teacher and not a ninja assassin, she thinks it is a good idea to confront Alexi in an effort to get Yelena, safely away from him.  After this goes about as well as you’d expect (ie, really badly), Salomeh still does not learn her lesson.  After Julian comes clean and she is being interviewed by Julian’s boss she refuses FBI protection.  Bardhyn is a very powerful mob boss who has evaded criminal sanctions for a very long time.  He is involved in human trafficking, drugs and guns and he has city officials and police/FBI agents on his payroll.  But that’s fine, Salomeh can just hide out on her own.  (Fortunately Julian convinces her this is a bad idea and to her credit Salomeh does listen to reason).

The sex scenes were mostly pretty good, except for this:-

He wondered if the people around them could possibly tell she was so wet for him that she was soaking through his jeans as she worked herself on his thigh.

which was kind of ick for me. And I’m not fond of sex noises being described as “yips and cries”.  Apart from that however, the sex scenes were definitely steamy, creative and demonstrated the sexual connection between the couple.

I didn’t love the writing style.  I found it over-full of adjectives and adverbs

His grip on her became even tighter, his intensity leaving Salomeh gasping for breath as he molded her body to his. She had wondered at his strength earlier in the night. Now, as his hard pectorals heaved under her palms and his corded biceps held her in his thrall, she knew the feel of brute power tempered by adulation.

and there were quite a few times where I felt the word choice was odd. I felt it was badly in need of further editing.

Julian was painfully hard now, from his memory of the picture alone. He felt a flash of impropriety as he slipped his hand under the blanket and gripped his cock tentatively like he was a nervous teenager expecting someone to come bang on the bathroom door.

He’d thought fantasizing about Salomeh would clear her from his head, but even now, still out of breath from his expenditure, he wanted more.

Bardhyn had laid Julian’s life fallow, had watched the flicker of hope in his friend’s eyes snuff out and be replaced with agony.

It had the melodic but dolorous tone of something not quite European.

She drew her knees up to her chest, innately curling up into the fetal position as if that would ward off any additional blows.

Things did pick up a bit in the last third of the book after I had taken a breather and tried to come back to the story with a more open mind (when I’m not enjoying a book, I find myself being extra critical and I don’t always think that’s fair).  But then Salomeh went and did something really dumb again and, given she and Julian had talked about how he is a trained FBI agent and she is a school teacher and she ought to stay where she was, I really couldn’t cut her any slack for inexperience or naivete. She falls back into bad (TSTL) habits for the grand finale even though she suddenly does develop some ninja moves.

Something wild possessed her, and instead of slowing down, she sped up. In a few steps, she was an arm’s length away from the man. She stopped short and delivered two quick jabs, one to his throat and one to his nose, followed by a hard kick to his groin. She did it so fast she surprised herself. She had obviously surprised him too, since he had put up no resistance. The man fell to his knees, and Julian came up from behind her and finished him off with a hard right to the jaw.

The main portion of the story takes place in only a very short time but the HEA doesn’t occur straight away – this helped me believe that there was more to their relationship than physical attraction.  Even so I thought the exchange of “I love you” was mighty fast, coming prior to the epilogue.  I was curious about what Salomeh was doing at the end of the book (or perhaps, more accurately, how she had managed it) and would have liked some more information about that.  I thought the ending was kind of abrupt.

It wasn’t the diversity I didn’t like. I still intend to read books by authors of colour or about characters of colour and I appreciated the ethnic blend of characters in this story,  where a white woman was very much in the minority.  The Brooklyn setting with its population of people from many different countries was a plus – I don’t know for sure, but my impression is that the area is a bit of a melting pot – and I liked reading about life outside my own very white world.

“You okay, 007?” she asked when his eyes met hers, and he realized he had let his mask drop and his face was an open book, dog-eared at the sexiest scene.

– and I noticed those because there were others which really didn’t.  I was trying to find things to like in the book by the end but unfortunately, there wasn’t a lot.

→ Kaetrin
Previous article: How (not) to lie with statistics
Next Post: Daily Deals: An intriguing spy story, a YA, NA, and a female Bering Sea captain