REVIEW: Down to You by M. Leighton 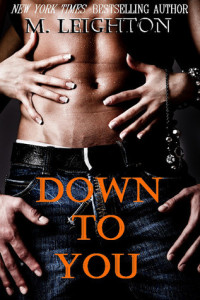 I find this book hard to grade. It’s very sexy and hot as the cover suggests but the story is kind of a miss. There are three main characters: Olivia, Nash and Cash. Nash and Cash are twins.

First, Olivia has this faux conflict. She’s always gone for the bad boy. Nash is supposedly the nice guy and Cash is the bad boy. I never understand how Olivia makes the differentiation. Nash, for instance, is dating her cousin but constantly flirts with Olivia and may or may not have slept with Olivia under the guise of darkness. More on this later. He leaves her flowers and makes out with her when her cousin is away on business. How these are the actions of a nice guy, I’m not certain. Cash is the bad boy. He owns a club and apparently has tattoos yet he always treats with her kindness, tells her he has her back, drops everything to help her out.

Olivia seems unconcerned that she may have cheated with Nash despite telling him she isn’t that kind of girl. She seems unconcerned that she might be sleeping with both brothers and what that might mean for the brothers’ relationship. What Olivia learns from one brother about his past isn’t translated to the next brother. It’s just kind of bizarre – she acts, in many ways, as if these two men aren’t related.

I know I am supposed to sympathize with Olivia. The story is told in the first person and she’s presented as the nice girl as opposed to her lawyer cousin who puts work ahead of all else and is purportedly more concerned about her social status. But the cousin gets the shaft in many ways, demonized for her work ethic in order to wash the sin of cheating away for Olivia. It’s never successful for me when the protagonist is doing something wrong and that is justified by vilifying the character being wronged.

The story itself lacks coherency because of the aforementioned convenient memory loss that Olivia shows when she shuttles from one guy to the next. I think the problem arises out of the book’s attempt to be clever. The book says it is a “love triangle only not really” and by that I think it aims for the angst of the love triangle without the messiness but for me, the spoiler or explanation of the love triangle which was fairly apparent, didn’t absolve Olivia’s actions because she didn’t know the spoiler until the end. Instead, she only knew that she was cheating on her cousin and sleeping with two brothers and having no real qualms about it.

Because there is no real plot (other than the secret of the twins), the story rises and falls on the character arc. But Olivia doesn’t grow or learn anything. Nash is presented as a user of women who advances his own career without thought for another’s feelings. He’s just dating the cousin because her father is the head of the law firm. When he sees the heroine, it really doesn’t matter than he’s dating this cousin. He takes what he wants.

As a romance, it simply isn’t successful. It would have been better if this was a horror or crime story – the two brothers that take advantage of unsuspecting young women to deceive and manipulate to do their dirty bidding.

The book and the characters looked to sex to solve all the problems. While it was enough for Olivia, it wasn’t enough for me. D