There’s been an influx of female-led traditional fantasy in the YA genre. If you had told me last year that this was going to become a thing, I would have been ecstatic. I’ve been getting bored with the urban fantasy and paranormal subgenres, and traditional fantasy is my weak spot. But let’s just say the reality has generally left me underwhelmed. Despite this, I had high hopes for your debut. At last a YA cover with a heroine wearing practical clothes! Unfortunately, it turns out I was mistaken. 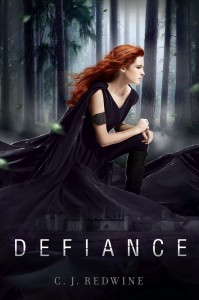 Rachel Adams is the daughter of Baalboden’s most skilled courier. But it’s been three months since her father, Jared, was scheduled to return and according to the rules of the city, he’s officially declared dead. Rachel refuses to believe it. She wants to find him but in this world, not only is it difficult to survive the wastelands outside the city walls, women are second-class citizens incapable of going anywhere without a male protector by her side.

With her father dead, Rachel is assigned a new protector but it’s not the older family friend she’s expecting. Instead it’s Logan McEntire, her father’s apprentice and the young man to whom she confessed her feelings two years ago, only for him to rebuff them. To say she’s dismayed is an understatement.

But there’s more at stake here. Baalboden’s leader, the Commander, believes Jared betrayed him and that Rachel knows where he is. You see, Jared’s last mission involved an important package and the Commander wants it back. And to obtain his goals, he will threaten everything Rachel holds dear.

First of all, I was misled by the cover copy. I honestly thought this was a traditional fantasy. Early chapters soon told me otherwise. This is actually a post-apocalyptic setting in which the world regressed into a society where there are several outpost-like cities scattered across a wasteland. It’s also vaguely dystopian in the sense that the city of Baalboden is ruled by a controlling megalomaniac but that comparison is tenuous at best. If I had to compare it to anything, I’d say the setting is similar to that of Reign of Fire.

This is fine and all but there’s no explanation for how this happened. Similar to the premise of Reign of Fire, Defiance claims that drilling into the earth’s crust awoke the Cursed One – a fire-breathing serpentine-like creature that is explicitly described as not being a dragon. A pity, since I spent half of the book thinking it was a dragon until that little factoid was revealed in a throwaway line later in the novel. It’s this lack of grace in the worldbuilding, the way I’d form a picture of the setting based on details given to me only to be jarred out of the narrative when it’s revealed that no, it wasn’t that way at all. I don’t know if this is my fault as a reader or simply the order and timing in which those details are revealed, but I literally found myself unable to buy into the worldbuilding. At best, I’d call it kitchen sink in style.

Another aspect of the worldbuilding that irritated me was society’s treatment of women. It sucks to be a girl in a post-apocalyptic world! You become a second-class citizen who cannot walk around without male supervision. You must have a male protector until you come of age, at which point you’re presented to all the available men and are Claimed. (Yes, that is what it’s called in the novel. Claimed.) You’ve become the source of all evil – for reasons that are never completely explained. Is it because your leader is a sexist lunatic? Or is it because of something else? You can’t wear pants because apparently, the sight of your legs turns men into rapists and it is your responsibility not to tempt them because we all know men can’t control themselves.

(I mentioned all of the above to Jane and she told me she saw similar worldbuilding in another post-apocalyptic YA coming out this fall. What is happening? This is the last trend I want to happen in the YA genre!)

Of course, this misogynistic society provides the perfect backdrop for our independent, feisty redheaded (of course she’s redheaded) heroine. The novel makes a huge point in telling us Rachel’s not like the other girls: she was taught how to track by her father, she can survive in the wastelands, she knows how to fight, and she prefers pants over dresses (this is how we know girls shouldn’t wear pants because if they do, they might get sexually assaulted). I get the feeling this is supposed to be a feminist statement but instead it left me feeling sad because the only way we can show a “strong” female protagonist is by placing her in a sexist society? Never mind the fact that it privileges a specific type of “strong female character” over others, and that’s just not an idea I can get behind.

The romantic subplot between Rachel and Logan is telegraphed from the opening pages. Nothing in it will surprise. Readers who love that dynamic will be happy because I think it’ll hit all their buttons. But those readers who like a surprise or two in their romantic progression will be bored. And I admit, there were a couple scenes where I rolled my eyes. At times, the execution could be rather inane.

Defiance is the first book of a trilogy so I feel that I must warn people that a love triangle is being set up for future books. It didn’t come into play much in this installment but I would not be surprised to see it unfold in the next book. I wanted to mention it here because I know other readers are as weary of love triangles as I am. Especially because [spoiler]Rachel and Logan get together before the end of Defiance and if there’s one thing that irritates me, it’s when a love triangle develops after the couple is together.[/spoiler]

There were times where I felt like this was a story about grief and working through it, but the narrative lacked subtlety, instead tipping into the melodramatic. Maybe this is a sign that I’m too old to be reading this book because that crossing into the melodrama pushed me out of the narrative rather than drew me in. I couldn’t identify with it at all and I’ve lost a loved one more than once in my life and cycled through the stages of grief every single time. I could not connect with these characters and what they were going through.

I do think there were seeds of potential. Even though Rachel’s lack of common sense annoyed me, I liked her conflict over something that happens late in the book. To avoid spoilers, she commits an act that changes her forever. I think that was appropriate because it is an act that does transform a person and makes them question if they’re worthy of forgiveness and love. I think something could have been built on it, and maybe it will be in future novels, but again the narrative felt clumsy to me in its handling here.

I would be remiss if I did not warn about the ending. In fact, some people may wonder why they read 400 pages to reach that ending. I count myself among that number. I don’t necessarily expect warm and fuzzy; this is a post-apocalyptic novel after all. But I do expect some catharsis, some emotional reward for following these characters on their journey. Instead, upon finishing the book, I immediately hopped onto email because I was so WTF over it. A friend emailed me back telling me that she felt sorry for me, that I’d actually read the entire book to get that conclusion.

I know it’s the first book of a trilogy so the conflict will continue and unfold over successive novels, but that ending doesn’t make me want to find out what happens next. What it does do is make me want to get away from these idiots as soon as possible. Characters are fallible and they should make mistakes. I absolutely believe this. But at the same time, when I’m promised liberation from a lunatic dictator – no matter how one-dimensional and caricaturish he may be, I expect it to happen. What I do not expect is (massive ending spoilers in the hidden text) [spoiler]the absolute destruction of the city you were trying to save, along with the majority of the city’s inhabitants[/spoiler].

I can’t help but feel that I fell for a bait and switch. I went into this expecting a traditional fantasy but instead got a post-apocalyptic fantasy masquerading as a traditional fantasy. Given how badly the post-apocalyptic subgenre has been working for me lately, this cost the book several points. I had a difficult time connecting with either Rachel or Logan, feeling that they made stupid decisions for the sake of plot more often than not. Around three-quarters of the way through the book, I was thinking this novel was in C to C- territory, okay but not great. And then I reached the climax and ending and wondered why I even bothered reading this book. D