I liked your voice and I liked the character interaction. I liked the idea of the novel but this novella was just that, an idea. It was a sketch and because of the brevity, I couldn’t buy into anything. I didn’t believe that there was an HEA for these three because there was no emotional exploration of such a thing. 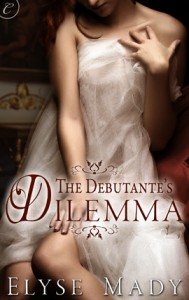 I admit that I looked at this book a couple of times at NetGalley but shied away because I wasn’t sure whether this was a love triangle. Love triangles are not a favorite of mine. But then, you sent me this very nice query with the book attached and I started reading it that night. The story is about seven chapters in length (including an epilogue) and a little under 80 pages. Normally, that would be enough for me in a novella but the issues that this story raises are simply too large in scope for the novella.

Miss Cecilia Hastings is the envy of every girl in London. During her first season, she managed to secure the attentions of Lord Jeremy Battersley, sixth Earl of Henley and His Grace Richard Huxley, fourteenth Duke of Wexford, Both gentleman were wealthy, well favored, and the best of friends. Both fell in love with Cecilia and have offered for her. Their love for Cecilia is the first thing to come between the two friends.

Cecilia is having a difficult time deciding between the two because she wants to have a marriage with passion and neither suitor has attempted one stolen moment with her. I actually liked this because it gives a nod to the restrictive time period when a woman’s reputation could be ruined by spending even a short time alone with a man sans chaperone. So many novels have the heroine gallivanting around the countryside without a worry about her reputation.

Further, you make much of the merest touch of clothing between the two characters which makes sense when the characters have had to confine their romance to dances, stolen tete a tete’s, and sidelong glances:

The ballroom could have been empty at that moment because, for just for an instant, as his strong arms cradled her, his satin breeches brushing daringly against the soft, sheer folds of her gown, he could nearly swear that the passion rushing through his body was flaring in hers too.

I liked that the metaphors and similes used by the characters seemed in keeping with the time period.

If unrequited lust were a terminal disease, Richard Huxley's friends and relations would have been well advised to put by a goodly supply of black-edged handkerchiefs, such was the severity of his affliction.

It is true that some of the writing is a bit florid, but I didn’t mind that. I think that kind of prose, again, gives a nod to the period and to the genre itself. It’s not that I don’t like spare prose because I do, but a little floridity and drama seems appropriate for the genre.

Yes, there was a lot I liked about the story including the setting, the voice. But the story reminded me of some proposals I’ve read for full length novels. Cecilia is a girl who has it all. She is in love with two men. The close friendship of the two men is nearly destroyed by the idea that Cecilia would choose one over the other. In short time, this conflict is resolved and we are on to the HEA with little explanation about how the friendship and jealousy will be resolved. The issue of jealousy is never really addressed, leaving me to wonder what these characters felt; how they would navigate an HEA after the story ended. The issue of jealousy was particularly poignant as there is a scene in which one suitor gives the other suitor the cut direct.

Cecilia, herself, has to make no difficult decisions. She is the picture of having your cake and eating it too. Her agnst at wanting to marry for passion seems almost to be petulant given her abundance of choice and in the short space, not enough of her character is fleshed out for me to be truly sympathetic. Further, because of the historical setting, the resolution of the dilemma would be an  anathema  for most families.

When I read the last page of the novella, I kept thinking, boy I wonder how the real story would have read instead of this outline.   I am giving this a fairly low grade because I felt the story was incomplete, but not because I didn’t like the author’s voice. There simply wasn’t enough romance, plot or character development for me to be satisfied with this story.   I would definitely read another Mady book but this one just left me scratching my head.   D