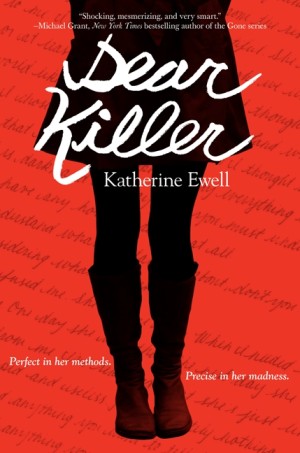 Between Dexter and Barry Lyga’s I Hunt Killers, I think readers have begun growing accustomed to the idea of serial killer protagonists. It’s a tricky prospect — balancing a compelling protagonist that keeps you reading and reconciling that with the fact that they kill people. In many cases, that is justified by the protagonist targeting only other serial killers. The main character of your novel, Dear Killer, does no such thing.

Seventeen-year-old Kit is a serial killer. She is in fact the most famous London serial killer since Jack the Ripper. It’s also something of a family tradition. Her mother was once a serial killer. She taught Kit everything she knows and when she retired from the business, her daughter took up her mother’s line of work.

The thing is, Kit is more of an assassin than a serial killer. You see, she decides who to kill based on letters. People write her letters with their murder requests and leave them in a special dropbox. Kit goes through them and selects who to kill. She gets paid a ridiculous amount of money and the letter they write is left behind with the corpse.

First of all, I don’t understand why anyone would agree to this. What’s the point of having someone killed if you’re going to be incriminated? It doesn’t matter if you didn’t do the actual act. You essentially hired someone to kill that person! And since the letter making the original request is left with the body, there’s irrefutable proof. It’d be one thing if the reasons behind these requests were things like “This man killed my family” and “This woman hit my child with her car.” And while there are requests like this, there are also ones like “This girl won’t go out with me.” That’s a rather petty reason given that the letter writer’s ultimate fate is sealed.

Secondly, how did Kit remain unapprehended for so long? All these incriminated people — am I seriously supposed to be believe that none of them told Scotland Yard where Kit’s secret dropbox was? If the location is spread through the underground via rumor and anyone who wants to make a request can find it, I just can’t believe none of the authorities wouldn’t figure it out. They have informants!

Speaking of Scotland Yard, Dear Killer is supposed to take place in London. But other than references to Scotland Yard and Jack the Ripper, it could have been set in the U.S. To be honest, I often forgot it wasn’t set in the U.S. in the first place. There wasn’t much else to give it a unique sense of setting.

I liked the idea of Kit’s relationship with her mother. On the other hand, I think there could have been more done with the concept of a serial killer mother and daughter. Kit’s mother was good at what she did but gave it up to hide in plain sight. But she couldn’t bear to say goodbye to that life completely so she taught her daughter. In doing so, however, she lost a bit of herself and everything that made up her identity.

I also thought Kit befriending one of her intended victims could have made for a very interesting story. I got the impression that Kit’s mother was the true sociopath and that Kit was simply the result of a child being raised and molded by a serial killer from a young age. Since her father was absent and uninvolved, how could she develop any sort of moral compass? That friendship could have humanized Kit and in the beginning I thought that was the direction we were heading in. Alas, it did not come to pass.

After Mafia Girl, I’ve begun to question this fascination with underaged criminal girls and their older law enforcement love interests. I can’t decide if this is a trend I’ve never picked up on or it’s simply a variation of the tried and true enemies to lovers trope. Most of the book, I couldn’t even figure out if I was supposed to believe in a relationship between Kit and Michael. I wasn’t sure if Kit was actually interested in him or just playing with him because he was the investigator in charge of her case.

Dear Killer could have been a very compelling read. I’m a big fan of female protagonists most readers consider unlikeable. But the book’s was all over the place and the plot’s multiple implausibilities just made it hard to take what was happening seriously. I can suspend my disbelief for one or two things but I have my limits and I’m sure other readers too. No investigator worth his salt is going to consult a seventeen-year-old girl on the most notorious case in London, let alone let her prance onto a crime scene. D