I decided to read this book because I liked the cover and the blurb made it sound like a different type of paranormal/urban fantasy story. Rachel Matre lives in Madison, Wisconsin, and runs a diner.   From all outward appearances, she is a physically fit and successful business owner but in truth Rachel is a woman who may be possessed by spirits.   (I know she is fit because the second paragraph tells me so even though Rachel’s fitness never is at issue during the entirety of the book).

Rachel was thirty-four but looked younger, with a body kept trim and firm by regular jogging. She had unruly blond hair and full lips, and a haunted l ook in her eyes that spoke of past traumas hidden deep and well.

The spirits of a local lake call to her and she visits the lake regularly to seek surcease from the passion that the calling arouses in her. 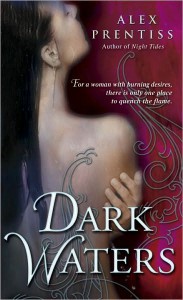 The story is a strange mix of mysticism and mystery.   Rachel communes with the lake spirits on a regular basis.   But recently she has felt a strange and different pull.   Ominous music plays in the background as the foreshadowing signals bad juju ahead. In another part of town, Ethan Walker, ethical architect, and one time lover of Rachel, is offered a building contract by one of the most famous developers around.   Although Ethan voices some initial concerns over the project, they are swept away with the words of the developer (whom we all know is a bad guy given the overt and heavy handed foreshadowing, once again).

The copy on the front of the book says “For a woman with burning desires, there is only one place to quench the flame.”   One might think that because this is marked as a romance, the one place would be in the arms of her lover.   I suppose this is true in one sense, but the lover of Rachel Matre is the water, not a corporeal being.   As I read the first sex scene in which Rachel is surrounded and penetrated by watery fingers, watery tonges, and, I presume watery dildoes, I kept thinking that no man could ever match the physical satisfaction that the spirits bring to Rachel.

She came to them naked, in the middle of the night, and they pulled her beneath the surface and enveloped her in sensual safety.   They took her to heights of passion she never dreamed possible, and in return she helped them right wrongs on the surface word.   She had no idea who they were or why they were here, only that they loved her and protected her.

I don’t think that this can or should be read as a romance because there is no romance here.   There is no exploration of a love relationship between two people.   Ethan does lust after and maybe even has tender feelings for Rachel; but Rachel loving Ethan lacks believability.

The world building is nearly non existent.   We know that there are good spirits. We learn that they are bad spirits.   Rituals can bring spirits forth and so can casually pleas from a spirit blessed being.   Whatever bounds there is to the lake magic is unknown, certainly to Rachel who makes no effort to suss out the origin of the spirits or question its control over her.

The tone of the story was very immature even though the topic was not.   I felt distanced from the story, as if it was all happening about 50 fifty away and I had to squint to make out the shapes and substance of the characters and their interaction.   The signals of who was good and who was bad was about the only thing that stood out, as if big neon signs were flashing above certain characters denoting their role in the story.

I thought the prose was very mundane with little mobility.   Strangely, because the sentences were short, the sections were short, and the prose was simplistic, it was fairly easy to whip through this story.   It’s under 300 pages and there is not much meat upon which to sink one’s teeth into.     I wished this different type of paranormal had been more engaging but it was not and given the immaturity of the prose, the lack of any character development, the weak worldbuilding, and the apathetic pace along with the unsexiness of the sex scenes, I’d have to rate this one a D.

→ Jane
Previous article: First Page: Unnamed YA
Next Post: Why do ebooks cost so much?