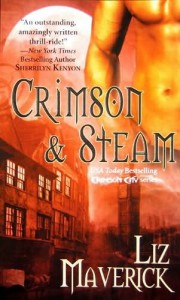 I mentioned in an earlier review that when I read a book that is well into an established series, I do so with some trepidation. Crimson & Steam is the eighth book in the Crimson City series, however, books 2-5 and 7 (an anthology) were written by different authors. C&S is deep into the series, but I figured that since more than half of the series was written by different authors it was possible that this book could stand alone. I could tell by page 2 that this was not going to be the case, and by page 15 I was getting the strong feeling that I wasn’t going to like the heroine.

But before we go there, a brief synopsis: Crimson City is the city of Los Angeles where vampires and werewolves seem to reign supreme, and humans are fighting to regain the upper hand. There are also mechs, a creation of humans that are simply trying to live with freedom. If this sounds complicated, it is, and stepping into the middle of this seething morass of ideas without clarification, backstory or buildup was confusing and slightly off-putting. From what I could glean from the story, the four different subspecies live on different strata, but honestly I’m not sure what that really means. Vampires living in the sky? Do they live in floating houses? Do the werewolves live underground? In caves? None of this was clear to me. There seemed to be a rigidity between the world’s different subspecies conflicting with massive civil unrest within each group.

The story revolves around Marius Dumont, a vampire, and Jillian Cooper, a human, and their star-crossed love. Marius is the head of the House of Dumont and also the head of the council of vampires. Jillian is a reporter that is currently freelancing since she lost her steady job in a prior installment in the series (I’m assuming). Marius believes that it is crucial for the vampires to pursue political connections with the werewolves, and decides that to do this he must marry a werewolf princess. With the union of wolves and vamps, the Vampire Council believes that the humans will back off from “Total Recall”, i.e., getting all the humans that are fraternizing with wolves and vamps back into the species fold and destroying (I think) the humans’ “enemies”. When I saw Total Recall, all I could picture was Arnold Schwarzenegger in a dress with a disembodied head saying “Two weeks! Two weeks!”.

While this would seem to be an intriguing story between species, it is obvious within the first dozen pages that marriage to anyone for Marius will be nearly impossible. That is because Marius and Jill share a special “connection”. The can communicate mind-to-mind, can sense each others’ moods and feelings, and are pretty much mentally and emotionally in each others’ back pockets. But Marius, being the diplomat that he feels he needs to be, knows that a union between vampire and human is not possible for him. I’m confused at this point as to why, since it seems that nearly everyone in Crimson City knows of his and Jill’s connection to each other. However, let us forge ahead: My dislike for Jill came with this:

There was no ambient danger. Suddenly Marius understood that while her sorrow was genuine, the rest had been faked. She had lured him here. There was no real peril. Such a situation had never happened. She had never before lied to him.

Apparently, even though Marius and Jill are mentally connected on a level that I think I would find incredibly intrusive, they cannot actually communicate with each other, and Jill throws herself at Marius in an unattractive attempt to have just one night with him. He, of course, refuses her and goes ahead to wed Tatiana Asprey, a werewolf from New York. Jill is at the wedding in her freelance position, and as a member of the Rogue’s Club, an interspecies group that has been invited to the festivities. That same night Jill discovers a dead body in one of the rooms in Dumont tower. She mentally reaches out to Marius, and he abandons his new bride in their suite to investigate. The dead man was a vampire, but none of the traits of vampirism remain in his physical makeup. At an underground Mech lab, they discover that the vampire was infected with a virus that is designed to change non-humans back to human. If you can’t guess where this is going…

Along with Marius and Jill, we are treated to the story of Charlotte Paxton and Edward Vaughn, a woman and a gentleman in 1851 Victorian England. Charlotte and Edward’s story is woven throughout the novel, and the reader is taken back to a sort-of steampunk England at the most tension-laden times in the book. Charlotte is a budding gardener (hah!) and owner of a draper shop and Edward seems to be a gentleman looking for a rich bride. They initially meet in Derbyshire and form a connection, which continues with Great Exhibition at the Crystal Palace. Charlotte and Edward may hold the key to the origin of species, and for me, their story proved to be more interesting, and more genuine, than Marius and Jill’s.

In addition to Charlotte and Edward, there are many secondary and even tertiary characters interacting with Marius and Jill, and it is difficult to follow all of the storylines, many of which are left dangling, perhaps with the intention that they will be continued in another book in the series. I, however, will not be continuing. I found very little to care for in Jill, who seemed to be selfish, overwraught and at times, downright stupid. Marius seemed like a guy with a propriety stick shoved firmly up his ass. The use of political and social mores to keep Marius and Jill apart is annoying and weakens both of their characters substantially. Marius and Jill have a connection, but there is a serious lack of character development, and the two of them remained very cardboard for me, as did the rest of Crimson City. D.