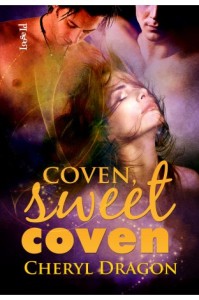 Right up front I have to ask this question – how much was “Coven, Sweet Coven” influenced by the Kevin Kline demi-classic In & Out, in which a male high school teacher in Greenleaf, Indiana comes out as gay during his wedding, in front of the entire, very supportive (albeit surprised) small town? Granted, the movie didn’t have any covens or triad relationships, but the “feel” of both your novella and the big screen plot harmonized well together.

Natalie is a small town witch who’s coming home to Green Leaf, Indiana from the big city of Chicago, following a dark vision that is drawing her back – back to her coven, back to her disapproving brother, and back to the two handsome, supportive men she calls her own. Zach and Logan have spent the last year missing the balance in their triad, a balance that had been present through high school and the “growing up” years, but chose to let her search for her powers and strength while they remained at home, loving each other despite the loss of a vital part of their relationship. With the help of her support system, can Nat unearth the threat to her hometown before the moon sets on Samhain and it’s too late?

While it was wonderful to see a menage story, this one suffered from several stumbles from which it just couldn’t recover to be wholly successful. To begin with, the story focused very heavily on how much Zack and Logan needed Nat while there was utterly no indication that Nat needed them for anything other than convenient prongs upon which to hang herself and the occasional cuddle after she pushed herself too hard. I appreciate the female-centric nature of the Goddess worship portrayed, but it seemed like anything with a Y chromosome was turned into a “why” in the story. It was outright stated why the men needed Nat in their lives, but never examined why Nat needed the two men for balance.

The “something wicked this way comes” plot did create some interest, but there was too little focus on pulling it into fruition beyond Nat having bad dreams and seeing something dark coming in her meditations. I appreciated the nod given to Wicca and the supportive community that can come from a coven, but I didn’t care much for what felt like the use of Wicca as a prop, rather than something sacred to be respected.

But what about the sex, you might ask. It was wanktastically…average. The amount, for a novella of this length, was gratuitous and felt more like something out of a Penthouse Letter than a creative expression of lovemaking between three people. The paint-by-numbers vibe left little to the imagination and, occasionally, had me tilting my head from one side to the other wondering if those combinations were anatomically possible in normal human beings – or if one or both of the men had side jobs in a Cirque du Soleil show. While I won’t go so far as to say it was bad, it was lukewarm, at best.

I think the main issue was that the story needed much more space than it was given to grow. It felt like you were trying to land a 747 on twenty feet of unpaved dirt road rather than the paved runway it deserved. There was so much potential in the story, so many places it could have, and should have, grown and expanded to truly explore the relationships not only between Nat, Zack and Logan, but also between Nat and her coven, their families and the townspeople. I honestly felt a little cheated at the end. D

Previous article: Kati’s Best of 2013
Next Post: Thursday News: A battle over the Anarchist Cookbook, return of The Girl with the Dragon Tattoo, the Popular Romance Project called government waste, an amusing assortment of calendars, and Gawker’s ability to boost the viral signal