I picked this up as part of my continuing attempt to get into the NA genre. It’s a genre that appeals to me in theory, but in practice, my experiences have been mixed, at best. I’m doubting that Connected counts as NA, though, since the characters are actually about 26 during during the bulk of the story. Wikipedia, sage of all the things, tells me that NA usually encompasses the ages of 18-25. 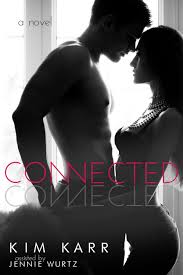 The story opens in 2006 (after a brief prologue in 1999). Dahlia London is a college student, and it’s Halloween. After meeting up with her boyfriend Ben at a frat party, Dahlia goes with her best friend, Aerie, to a local bar. There, she meets and is inextricably drawn to the lead singer of the band that’s playing, one River Wilde, of the Wilde Ones (I may have sighed at this point at the names). River wants to meet up with Dahlia after his set (he’s as attracted as she is), but Dahl, shaken by the encounter and fearful of how close she feels she is to cheating on her boyfriend, waits until River is back on stage and then hustles out of there.

Fast forward four years. Dahlia and Ben are living together and seemingly happy. They’re getting ready to go to a dinner at which Ben will be presented with a prestigious journalism award (one of many details that didn’t quite ring true, given Ben’s age). Ben is acting kind of mysterious and strange; begging for a quickie one moment and crying in the bathroom the next. His mysterious behavior is forgotten, however, when they are carjacked on the way to the awards ceremony and Ben is shot and killed.

We then get a montage of sorts of Dahlia too distraught to do much but lay around her house and cry for a couple of years. When she finally starts to come out of her grief, she takes a job at her friend Aerie’s magazine, and that’s how she ends up re-encountering River Wilde (sigh again), in Las Vegas. The two again feel an immediate connection; at first Dahl doesn’t think River remembers her, but of course it turns out that he does and that their brief encounter five years earlier was as significant for him as it was for her. The two spend the night together and are basically together from then on, though naturally the path to true love  doesn’t run smooth.

There was a lot wrong with this book – starting with the vaunted “connection” between Dahlia and River. I could never figure what it was based on, other than physical attraction. The fact that they find each other “hot” – their word, not mine – is repeated ad nauseum throughout the book. River verbalizes it often (seriously, he just says “that’s hot” or “you’re hot” to her in a way that was reminiscent of Paris Hilton, circa 2003). Dahlia thinks a lot about how hot River is. There’s a lot of lip-licking on both parts (seriously, I wanted to give them each a Chapstick). At one point River is mooning over Dahl and tells her “You’re just so beautiful” and I made this note in my Kindle: “Is she? What’s so great about her?” I seriously couldn’t figure out if Dahlia was supposed to be really extraordinarily gorgeous (that can be hard to determine from a book written in the first person, which Connected is, since the protagonist doesn’t usually go on at length about their looks*) or if it was just that he was so attracted to her that she seemed more remarkable than she objectively was.

* Notable exception: Jennifer Wilde’s old bodice-ripper, Once, More Miranda, which I read years ago and which I remember being notable for the number of references the heroine could get in to her long crimson tresses. Anyway…

Both characters seem juvenile – they bond over a shared love of Rebel Without a Cause. Now, don’t get me wrong – James Dean is well worth seeing and the movie has a certain melodramatic appeal. But even by the time I saw it (in the 1980s), it felt pretty dated, and I would think it would appeal more to histrionic teenagers than a couple on the downslide to age 30. Also, at one point River cuts a line and bullies a hotel employee to get Dahlia’s lost necklace back, and I guess we’re supposed to take it as a sign that he’s hot shit and also that he’ll do anything for her. It just made me think he was rude.

There’s a *lot* of sex in Connected, but it didn’t feel like it was meant to be an erotic novel; the sex scenes are fairly explicit but nothing out of the ordinary. Rather, all the sex feels like filler between other scenes, like the author couldn’t figure out what to do with her characters, and just decided to have them screw again, over and over. I think it was again meant to convey how “connected” River and Dahlia were and how “hot” for each other – but if that was the case it didn’t really work for me. The connection continued to feel shallow and based solely on animal attraction.

Music is supposed to be a big part of the story – Dahlia’s late father was a manager at the Greek Theater in Los Angeles, and so Dahlia feels very connected to music and has been to a ton of concerts. This is an interest she obviously shares with River, but it’s not drawn out; we’re not really given an idea of what type of music he plays or if she really even likes it his music much. Her tastes were a little bubblegum for me, and I get the sense that The Wilde Ones (sigh) were more of an alt/rock band – maybe like Kings of Leon or something? I’m not sure. Some of the music Dahl mentions kind of made me roll my eyes, like, “that’s what you consider a really significant, life changing song? ‘A Beautiful Day’ by U2? Really?” Now, I *know* I’m being unfair here because I really believe that the  music that touches or moves a person is a very personal thing, and I also know that if the author had picked really obscure songs and musicians, I probably would’ve rolled my eyes at that, too. So, okay, I’m being unfair, but let’s just say it didn’t strengthen the connection I felt to Dahl as a character.

One thing I’ve noticed about the NA genre (even if this book isn’t entirely NA, it still has a distinctive NA feel to it) is that the characters often seem to have been beset by an unusual amount of tragedy for their young lives. This certainly holds true here – Dahl loses her parents and an aunt in a plane crash as a teenager, and later loses the uncle that raised her afterward (I’m guessing he was the aunt’s husband, though I don’t remember it being entirely clear in the story). Then she loses Ben – that’s a lot of sudden, violent death for someone in their mid-20s.

In other ways her life seems surprisingly easy – she’s somehow independently wealthy enough to never have to worry about money for the nearly two years she’s grieving over Ben, and when she’s ready, why, there just so happens to be a fairly glamorous job waiting for her. River has a more conventional background, but his rise to success seems to have been unusually easy. I kind of had to go by clues but the sense that I got was that the band was “on the verge” but were not really big stars yet, though they seem to have had enough success for River to buy a house in the L.A. hills that I bet would have cost a zillion dollars in real life. His main professional roadblock is some ambivalence over how much higher he wants to rise – whether he wants the fame and the touring and all of the stuff that goes with that. I did actually like that aspect of the story, though I wondered a bit at River’s lack of commitment to music.

There’s really not much conflict at the heart of the story; mostly it’s just Dahlia’s vague fears about the intensity of her feelings for River vs. her loyalty to Ben’s memory. River comes on really strong pretty much the whole time, which scares her (and IRL, would be a giant flashing DANGER sign for me).

As I mentioned, the book is told in the first person. The bulk of it is told from Dahlia’s perspective, and then for some reason the last few chapters are from River’s. (Among River’s Deep Musings about Dahlia: “She’s beautiful, tall, thin and has these amazingly sweet doe eyes that make her look innocent, and make me want to keep her safe.” Ugh. Good to know she’s not a fattie, River.)

The prose style is a bit choppy; Dahlia will start to reminisce in the middle of a scene about, say, the first time she and Ben had sex, or some anecdote about her father, and I would get confused about where the reminiscence ended and the return to the present time began.

The story ends with an epilogue that sets up the action for the next book; without giving too much away, I woulds say that a surprising twist really wasn’t that surprising (I had been kind of expecting it), but it was lame and unbelievable. Though to be scrupulously fair some of it *might* make more sense once it’s better explained, presumably in book two. Unfortunately, I don’t think I’ll be reading that one. My grade for Connected is a D.