I had initially stayed away from these books because of the generic mantitty covers and the general paranormal malaise I was feeling. I picked up the first book because I was told that these books were police procedure stories. The heroine, Charlotte ‘CeeCee’ Caissie was a New Orleans detective and she becomes entangled with Max Legere, a shapeshifter of some sort and possibly the head of one of the largest, most powerful crime syndicates in New Orleans. While I had some problems with the first book, Max was sufficiently intriguing for me to pick up the second book. 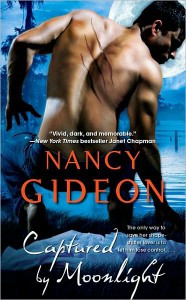 I had quite a few problems with the second book, Chased by Moonlight, particularly because CeeCee was supposedly investigating a crime that involved Max while still sleeping with Max. I remember the time that she kissed him the interrogation room and my head almost blew off my shoulders. But I had the third book and I was hoping to find out more about the mystery element pertaining to Max’s heritage and so many others had said that the third book was better.

I guess this third book is better in that CeeCee does almost not police work and thus that totally inaccurate portrayal isn’t part of the story and while we did learn more about Max and his power, more new questions were raised than old ones answered. I also thought book 3 shined a harsh light on the difficulty of maintaining a romance between the same characters over a number of books.

Max and CeeCee engage in a teeter/totter of emotions, getting into fights on one page and telling the other “I love you” on the next. The problem with this is with each utterance of “I love you”, the words become less meaningful until they got to the point of being almost disingenuous. I don’t really know if either knew what it meant to love the other.

Max refuses to share the shifter secrets with CeeCee for no apparent reason. Max knew little about shapeshifting and while CeeCee was never the brightest candle in the candelabra to me, Max viewed her as some kind of deity. Why not share with her? The only reason why he didn’t share was so that CeeCee could do something stupid relating to the shifter part of Max’s life and the forced conflict and fights could continue. Their constant refusal to communicate and continued secret keeping was supposed to create tension but it was so fake and contrived that all it really did was frustrate me.

The characterization of CeeCee continues its downward spiral in this book. Seen from the eyes of Max, CeeCee is strong and sexy. But CeeCee as her own narrator and in her own actions is displayed as thoughtless, defiant, and uncontrolled. CeeCee has so little understanding of Max and his nature (admittedly this is Max’s fault) but when she is provided insight, instead of trying to work with it, she butts up against it.

I kept asking myself what kind of detective could she possibly be. She had no ability to filter through information and analyze it and come up with reasonable conclusions. Detective work requires meticulous attention to detail, methodical review of the facts, reasonable inferences drawn from facts and CeeCee displayed none of these characteristics.

The two engage in physical violence toward each other. They are cruel to each other in both word and deed. I actually felt that there was a scene in which Max begins to rape CeeCee but in the end turns it into a blissful orgasms because he bites her neck and she succumbs. I’ve read my share of forced seduction scenes and this one really bothered me, primarily because CeeCee had been violated in a terrible fashion when she was much younger:
[spoiler]"I dare. I'm in your way, Savoie. Always right there in front of you, in your face. So what do you want?"

He was up and over the couch. Having anticipated his move, if not his speed, Cee Cee dodged into the small dining area. He stalked her around the square table, his unblinking eyes never leaving her face. In that lean, hungry look was the edge of darkness that had shadowed him for weeks. Stripped down to his primitive urges, he seethed with them, and Cee Cee began to tremble with alarm, with anticipation.

She feinted left, then dashed for the kitchen to streak through it to the more maneuverable living room. He caught her by the waistband of her jeans, jerking her off her feet, flinging her face down across the pass-through breakfast bar with a force that knocked the wind from her. She gasped like a landed carp until she got a sweet pull of oxygen. Then she was squirming, writhing like a slippery fish, but she couldn't shake him.

One hand clamped on the back of her neck while the other tore down her jeans. Because she'd vowed not to, she didn't make a sound, but she fought him in earnest. Pinned and helpless, the worst kind of memories tore into her.
The way he tore into her. Without warning, without care, lifting her right off her feet.

She clung to the far edge of the counter, her eyes squeezed shut as he pounded into her, huge, hot, and hard. She couldn't have found the breath to cry Stop if she wanted to.

She could hear the hoarse rasp of him panting against her ear, the sound unlike any she'd ever heard. Fierce, frightening. His nails, sharp as daggers, nicked the side of her throat as he gripped the neck of her shirt and ripped it halfway off her. Dark, ugly images swarmed up, reminders of pain and torture and-Oh, please, God, let it be over.
Then he said her name, snatching away her fright in an instant.
"Charlotte, take me. All of me."[/spoiler]

The pairing of the human and the beast also strained credulity. Three books is spent building up Max as this super super natural. He’s stronger, more powerful, more pure shapeshifter than any other shapeshifters. Yet mere Charlotte a human can somehow defeat nature, the natural instinct, and control him when Max himself cannot. It’s very fairy tale which seems ridiculous to complain about in the course of a paranormal but it didn’t ring true throughout the story.

The story had such a weird rhythm and I often questioned scene choice. Like after a funeral, they held a party even though there were killers somewhere out there. We spend a bunch of time at the party with food and dancing wherein the characters engage in a lot of internal rumination. This is then followed by a barbecue . Am I reading a romantic suspense book? or Full House? There was too much focus on the emotional part of the story and the sex part of the story when there were supposedly all these dangers around them.

The book lacked focused and sometimes consistency. For instance, Max didn’t know baseball from softball from football but could say, “This is softball, not roller derby” in response to a cautionary warning from her.

Unfortunately, this book is it for me. The book reminded me of a fish flopping around on the deck. There was no direction, no control, the storyline was all over the place, and Max, who I liked at one time, became too much of a caricature. I know that there are three more stories planned in this universe, but I’ll can’t foresee reading them. D