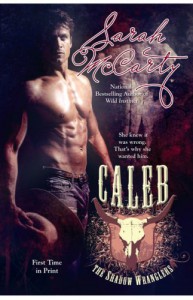 Your books have a beautiful look to them. They look and feel lush, heavy, as if the reader should curl up in front the fireplace with a hot toddy, a blanket and commence reading. Unfortunately for me, if I had done that, I would have been cooked to a crisp because this book too me a month to finish. It’s a lengthy tome, nearly 400 pages, and at the end, I couldn’t really understand why it was so everloving long.

Caleb is the beginning of a paranormal series that is populated with, at least, vampires and werewolves. The first story features Caleb, a shapeshifting vampire, who is the eldest of a group of vampire brothers. (They are a group of rogues, says the blurb. By rogues, I assume that means renegade or someone who rejects the an established group, rather than say a dishonest, knavish fellow.)

The story begins quite well. Allie, the town baker, is in lust with one of her regular customers, Caleb Johnson. She tries to flirt with him, but he seems resistant. She buys a push up bra and provides him (or hopes she provides him) with a tantalizing glance but he seems unmoved. She’s at the end her rope because he does come in every morning and her instincts tell her that something is there between them only he won’t act on that chemistry.

The reason he won’t act on the chemistry is because Caleb is a vampire but when Allie is attacked outside her bakery by a true werewolf, Caleb comes to her aid. He is badly wounded and Allie, urged by a voice in her head, gets the wounded wolf in her vehicle and drives to Circle J, the ranch of the Johnsons. Once there, she’s incarcerated by Caleb’s brothers and then, when he needs blood to live, is taken to Caleb to feed. Caleb feeds upon Allie until she is near death from blood loss. To save her “life”, Caleb has to turn her, which is easily done by having her food from him and slipping into her mind to make the blood taste like champagne.

Does Allie have problems with the fact that she was killed, taken from her family, her entire life changed without request because she tried to save Caleb’s life? A few but none that stop her from boning Caleb until he’s crosseyed. Allie’s loss of her family, contact with her brothers, is nothing more than a blip on her radar. She argues about it once and then it kind of fades away. The supposed fued between the Johnsons and the D’Nallys which brought Allie to death and then into vampirism also fades away. Caleb refers to Allie as his wife and she accepts his claim as wife. Then doesn’t. Then does. Then doesn’t. The plot threads dangle like jellyfish tentacles in the ocean; seeming dozens of them held up by nothing more substantial than gelatinous masses.

The worldbuilding was convenient, at best. When there needed to be some magical, paranormal capability, there was. When it would interfere with the story, then the worldbuilding point was forgotten. For example, why does Allie JUST NOW start hearing voices in her head? Why is she the only one to be fertile when vampires can’t get pregnant? Why is she only able to feed from Caleb?

Allie is one of the most foolish heroines to come along in a long time. She leads Caleb into a nest of bad people hoping that they’ll be interested in just talking to her. Of course, they aren’t. She’s a valuable female, after all. All breeding females in paranormals are valuable so everyone wants her and everyone wants to go to war for her. Merely by making Allie phenomenally sexually attractive to every paranormal male around her does not render her likeable, particularly when she plays the stupid role for most of the book.

To say this book is slow moving would be an understatement. Snails being chased by ground beetles move faster than this book. These characters do nothing but talk. There was a 10 page discussion Caleb, Allie and Caleb’s brothers, and their BFF werewolf neighbor have in the kitchen about whether Allie is pregnant and whether she has a special power. (They don’t know because they’ve cut themselves off from the greater vampire world so they are just guessing which is supposed to be super attractive instead of merely ignorant).

This was 400 pages of talking, talking, and more talking and it wasn’t even fun and interesting talking. It was mundane, ordinary conversations that are barely worthwhile listening to live let alone reading in print.

Toward the end, the villian makes his appearance and is clearly more powerful than either Allie or Caleb or both combined, but the villain places himself in a precarious state because of Allie’s powerful attraction: “You know, I really shouldn’t humor you, but I find that we’re so much alike, it’s difficult not to indulge your moods.”

And, the concept of the baby that the group spends so much time contemplating? Doesn’t even enter her mind when Allie is taken hostage. She is ready to die rather than help the villain. No thought to her supposed pregnancy until toward the end of her captivity (which is pages and pages and pages long but in reality is no more than an afternoon). Conveniently, a new deadly weapon that is deadly to weres and vamps is not deadly to Caleb. Why? Not sure. I think Allie makes him invincible but maybe it’s because, well, I don’t even want to guess.