I requested your book because I’d seen a number of favorable reviews and I love an ugly duckling story, which, at first glance is what I thought this book was. Unfortunately, while the premise was promising, I found myself disengaged from the characters and found the action made the book quite easy to put down. 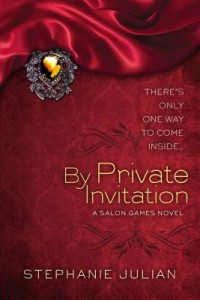 Annabelle Elder has decided to attend a New Year’s Eve costume party at the Haven Hotel following the discovery of her smarmy boyfriend in an extremely compromising position with his secretary. Tired of being overlooked, she and her best friend, Kate, are determined to go to the party and have a good time. Lucky for Belle, Kate is a world class seamstress and Kate has created quite the daring costume for Belle. Almost as soon as Annabelle enters the ballroom, she catches the eye of Jared Golden, who co-owns The Haven with his brother, Tyler. Jared is a gorgeous bachelor-slash-millionaire and known as a man who loves women, and he’s intrigued by Belle. Even more so when he dances with her and he discovers that she is intelligent and quick witted. He finds himself struggling with unfamiliar jealousy as other men ask Belle to dance and he’s forced to act as host for the evening. But soon he’s able to tear himself away and escort Belle to the famed private gardens of the hotel. As they explore the gardens, they engage in some heavy flirting that culminates in sex on a secluded bench in the garden. It is after the mind-blowing sex that Jared decides to invite Belle to The Salon, the private after-party that he hosts. The party goers are made up of ten close friends who sign confidentiality agreements and then engage in a night of wild sex. Belle immediately agrees, having decided that she’s going to live it up this one night before going back to her quiet life of owning an antiques shop.  The couple goes to the party, which could have been a set up for some really inventive, spicy love scenes, but instead was mostly a threesome scene and then a voyeur scene that both felt slightly forced and not that creative.

The morning after, Belle overhears Jared talking the Tyler about the fact that he noticed a pin that Belle was wearing with her costume, and he believes it might be part of a set of jewelry that was stolen from his grandmother. Belle storms off thinking that Jared was just using her to get the pin back. Of course, she leaves the pin – it’s not hers. Little does she know, Jared is bewitched by her magic vagina, and is not ready for things to end. Belle drowns herself in wine and True Blood season one, and Jared works to find her (she didn’t give him her last name). Once he finds her, he shows up at her shop under the guise of looking for a new area to put a spa  — what luck there’s a hidden castle in the area that no one is using! He insists that Belle go to dinner with him because he wants her to furnish the castle/spa. During their business meeting they also agree to have a no-strings-attached sexual relationship. But Jared has trouble on the home front with his parents, so he must leave almost immediately after he and Belle have sex, so Belle thinks he’s not very serious about her. The misunderstandings between the two continue throughout the book mostly due to the two making wild assumptions about each other and not having conversations to resolve the misunderstandings. There is also a storyline about some paintings and Belle’s past, but honestly, it felt forced into the story as a plot point, and was not something that propelled the story forward at all.

Ultimately, this book failed for me because the “ugly duckling” heroine seemed neither ugly, nor awkward, the hero was supposed to be controlling and dominant, but mostly seemed to suffer a lack of self control (the heroine literally couldn’t breathe his air without him getting an erection – what, is he 14?), and the “conflicts” never really seemed to emerge as actual problems for the couple. I also wish that the sex scenes hadn’t seemed so forced. They often felt like you were following a quota – “I’ve written 2,500 words, time for a sex scene!” as opposed to flowing organically throughout the story. Overall, By Private Invitation was a miss for me. I’m giving it a D.

→ Kati
Previous article: What Janine was Reading in October, November, and December of 2012
Next Post: Daily Deals: Cursed ducks, a motley crew of siblings, and a YA quadrangle?