I have been a fan of your books since the first in the series. Yes, I do kind of make fun of the books but I’m really making fun of myself for being in thrall to the world that you are building and the idea of these world weary warriors that go out every night and battle demons and long for their breh hidden, their mate. Unfortunately, the world building based on a mate bond has its limitations and repetition is one of them. Born of Ashes is book four in the series and I wished for a greater advancement in the plot line, more focus on fleshing out the world, and perhaps just a little less on the maaate boohhhhnd (or the breh hedden as it is known in the Ascension series) 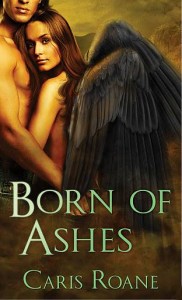 Fiona was a human slave who was used as a blood donor for death vampires. She would be brought to the point of death repeatedly in order to capture her blood at the most potent and then revived. In the last book Fiona was freed. In this book, she’s intent on seeking vengeance. I was incredibly disappointed that I didn’t get to experience Fiona’s healing from being a blood slave to a free woman. Instead, we are presented with a fully healed, both physically and mentally from her decades of torture and she is intent on wreaking vengeance on her oppressors. Fiona’s vengeance, however, is primarily conducted in some kind of command center.    The hero is Jean Pierre, a French guy who wears bows in his hair.  I could not tell you one specific, memorable trait of Jean Pierre’s other than he wears bows.

Whether it was obvious in other books in the series and I missed it, the portrayal of women and men was marked. This is a paranormal world and the idea is that the bond between two angels makes them stronger. Yet, there is not one female that battles the demons with the swords. The most that they do is logistical work from a control room. Sometimes they do clean up work. From the control room. There were only two angels that actually leave the compound. One was Parisia whose role is to fly over regions with her mate and spread peace. The other was the former commander, a female, and her job was given over to Marcus, in book two. Let me repeat. The only female in charge had her position taken away and given to a man because he was better at it.

So the female angels work as the support staff and in Born of Ashes plan a special public celebration. Basically its a group think tank of wedding planners.  And all the men are uncomfortable and worried about their ladies being outside and subject to danger. I don’t know, how about training them to handle a sword so they can kick ass and still be able to walk outside?

What made me so uncomfortable is that I think I was supposed to read this series as some great elevation of the feminine; how integral they are to the future victory of the “good” side. Instead, it highlighted this idea that men are only capable warriors and that the women’s power comes through emotional strength only. But in a paranormal, why? When you can create any kind of world and you want to create one with equality in the sexes, why make the men so much more physically capable than women?  Why make them better managers?  Why make them better able to handle their emotions?  Why show the one female leader as an unstable bitch who can’t handle her job?

The romantic conflict seemed about how well the warrior angels could protect their women (not terribly well as it turns out) which was really a retread of the conflict in the previous books to some extent. The most compelling part of the story was between Thorne, the leader of the warriors of the blood, and the heroine of the next book. Her family put Marguerite in a convent against her will because she was the lover of many men. She’s been in the convent for the last 100 years and is rooming with Thorne’s sister. He can trace into the convent, but because of an ankle bracelet she wears, he can’t get her out not to mention if he tried to, it would cause a great scandal and place their war in jeopardy.  She’s been getting schtupped by Thorne regularly for the last 100 years and he loves her. She enjoys having sex with him and she cares for him, but she wants to be free, more than anything, to live and to have as many men as she wants.

Also, there are huge worldbuilding holes like the bad guy is able to stop time (stasis) and then steal one of the warriors of the blood and try to kill him. The bad guy is not allowed to kill anyone directly but apparently can put bonds on the WOB so that with every breath, the bonds get tighter, until he has suffocated himself. Why hasn’t the bad guy done this before? Like he can put a stadium of 20,000 people in stasis. So why wouldn’t he, during a front lines battle, put everyone in stasis and then wrap the WOBs in these special ties and kill them all?

The Thorne scenes were very poignant. He totally loves her. He’s been fighting for 2000 years and being able to go to her has kept him sane these last 100 years. He knows that when she is free, she will run away from him. He knows she doesn’t love him like he loves her so while he is helping set her free and he is begging her to stay and she is promising she will stay they both know she is lying.  While I didn’t like this book, I’m reading Thorne’s book which is out this spring.  I might be able to cut the cord then.  (I hope)

For those keeping track, the smells of Fiona and Jean-Pierre of these two is coffee and donuts. D