Lately I’ve been reading a ton of billionaire heroes and their submissive heroines. I don’t apologize for it. For some reason, the trope is really working for me. So, when I read the blurb for your book, Blush, I immediately reached out to Jane to request it. What I found was a tale with a ton of missed potential, but an authorial voice that I enjoyed. 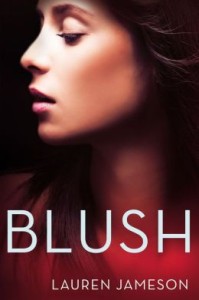 Madeline Stone is fleeing from her previous life. A life in which a car accident where Maddy was driving killed her sister, Erin, and Maddy walked away with a few scars. She’s compensated for the disarray in her life by shutting down. She risks very little. She has a routine and she sticks to it. She sees a therapist to help her work through her issues. She’s quit her job as an Optician to become a waitress at a diner. Her routine is such that any deviation can bring on a panic attack. So Maddy never deviates. But her therapist has encouraged her to make a list of things she’d like to try. And then try just one each week. It doesn’t have to be a big thing, just something to break her out of her routine, to help her move beyond the grief.

This is how Maddy finds herself sucking down a soda at the El Diablo casino. And this is how Alex Fraser, the owner of the casino sets eyes on her. He realizes she’s a terrified little rabbit, but she’s gorgeous, and once he engages her in conversation, he’s charmed. He encourages her to go play a game of blackjack, and Maddy wins quite a bit of money. She’s sure Alex arranged it that way, and is irritated that he’s put a blemish on her one act of daring. She leaves the casino irritated, but unable to stop thinking about the enigmatic man she’s just met.

Alex can’t stop thinking about Maddy either. He’s almost positive she’s a submissive, and he desperately wants her for his own. But he’s also quite sure that Maddy has never considered the lifestyle before, and he knows that rushing her in any way will just make her bolt. He begins a slow courtship of Maddy, hoping to build a trust bond between them. He knows Maddy wears a locket, but she won’t talk about her past at all, and Alex is sure that her past is why he can’t finalize their trust, and why she won’t give herself over to him completely. He uses D/s play to attempt to build that trust. While she’ll trust him in the bedroom, she refuses to share her past with him. Will Alex ever be able to convince Maddy to trust him? Will he ever trust her with his secrets?

This book had a ton of potential for me. I enjoy D/s books. I love an arrogant billionaire Dom, and I like stories where one character is being introduced to D/s. But there were so, so many things that I felt were brushed upon, but never delved into. For example, Maddy is fleeing her life. She uncomfortable talking to her almost brother-in-law, Nate, who is surviving her sister’s loss as well. Was it happy relationship prior to her sister’s death? Or unhappy? I gather she and her sister were close, but you never build the importance of that relationship into the book. So I’m assuming that, rather than knowing it from the text.

Alex makes it clear that he disapproves of therapy/therapists (which aggravates me to no end) due to his past. His ex is a therapist, and apparently her getting with him, then intentionally getting knocked up has made him hate ALL therapists and therapy, which immediately makes me think he’s kind of a moron. Anyway, Alex has a child. We know this because once Maddy saw an orange ball under his bed. We never actually see the child, who you would think would inform his character in some way.

Also, Maddy was once an Optician (which is a cool, unusual career for a romance novel heroine). But she gave up the job to become a waitress. Because of the grief…or something. Each of these things was brushed upon, but never explored, making this book feel very surface-level to me. There was no emotional exploration, thus I never truly believed the characters’ connection. The epilogue features Maddy, wearing an engagement ring, meeting Alex’s daughter for the first time. So, she’s made the lifelong commitment to marry him, and is actively planning a wedding and has never met his daughter? Really? That doesn’t seem healthy. Also, I’m also for the redemptive power of love, but Maddy’s relationship with her therapist, one of the only plot points that you delved into even a little bit, has apparently fallen by the wayside. I would have thought that Alex’s acceptance of her therapy, and heck, maybe even meeting with the therapist might be in order. She still sees the therapist, but it’s clear in the epilogue that she credits Alex with her recovery.

I do think that you have an interesting authorial voice, but for me, this book felt unfinished and light in the plot and character development area. I thought the sex scenes were interesting, and well choreographed, but really didn’t do much to build the relationship between hero and heroine. Overall, I thought the book had an interesting premise, and interesting plot points, none of which was actually developed. Therefore, I’m unable to give Blush a recommendation. Final grade: D