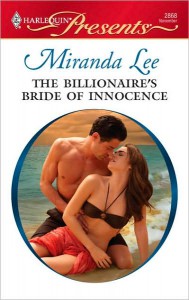 The previous two books in the series have told us some awful things about James, the hero in Billionaire’s Bride of Innocence. James was desperate to have a family and when his super model girlfriend could not deliver the goods, so to speak, he divorced her, impregnated a nice young woman, and married the nice young pregnant woman.   Yes, James is a classy guy.   But he’s a billionaire who wants children.   Doesn’t that really absolve him of all sins?

Megan, James’ docile sweet, innocent wife, loses the baby. In the hospital, she overhears James’ two friends, Hugh and Russell, speculating as to whether the marriage will stay together now that James has lost the one thing that he wanted.   Hugh is incensed that James impregnated and then married Megan in the first place, knowing that James did not love her.     Megan is distraught over this news and basically moves into the pool house, refusing to allow James touch her.

James is upset because, well, he wants to be a dad and how can he get her with child again unless they have sex?

Becoming a dad was what James wanted most in the world these days, but it was almost impossible if your wife never let you make love to her.

James sympathised with Megan. He really did. But running away from life was no answer. You had to face up to things, then move on.

Of course, Megan was an extremely soft, shy, vulnerable girl. That was why he’d chosen her.

Megan is torn, though, because she loves James and even the revelation that he is just using her as a baby making machine doesn’t quite kill off that love.   Further, Megan is helplessly attracted to James so that when he suggests a second honeymoon for the two of them, she readily agrees.   Not only does she readily agree to go and have island sex with him, she seeks out the help of her friend, Nicole, to get a full makeover.   She is to become the sexier, more outgoing Megan in order to better appeal to James.

Yes, Megan has no pride. Or backbone.   Or sense of self worth. Her entire life is wrapped up in James and even though there is a tiny period at the end where Megan decides that maybe she is better off without James it doesn’t last long enough to convince me that Megan will be anything but an appendage to James.

James is both appalled and titallated by the new Megan.   He was a bit bored with their pre miscarriage sex.   Megan was usch an innocent and James felt constrained in trying out his dirty ways with her.   What are James’ deep secrets?   Well, he apparently likes to do it in other positions than the missionary and he ties her wrists to the headboard at one time.   Oh, James, your kink is so intimidating!   Thank goodness James is a billionaire because how else would a woman ever want to stay with him?   Actually, Megan was frustrated with the loving that James was doling out.   It was a bit too tame for her as well, but she didn’t say anything to James and she lacked the confidence to initiate anything.

Very little emotional energy is spent contemplating the miscarriage.   James just wants to start boning Megan again so he can make more little babies.   Megan can’t stop thinking about how much she longs for James’ body even though he has no love for her.   It’s probably fair to say that he little   affection for her either, other than she was a suitable baby making vessel.

I’m not certain what disgusted me more. Megan’s inability to value herself and her persistence in continuing to abase herself to try to gain James’ love or James for being a grade A bastard.   I loved it when he accuses Megan of being deceitful when he finds her birth control pills because for a man whose baby making is at the forefront, birth control pills are akin to the devil’s drug. I vacillated between wanting to punch James in the face or shake Megan till her teeth fell out.   It’s not a failure of a book, the writing is too competent. I can give it a D because I am sorry I read it.

“>ebook format from Harlequin only until November 1.