REVIEW: Between the Duke and the Deep Blue Sea by Sophia Nash

So. I’m thinking that I’m not quite the right reader for your books. “Between the Duke and the Deep Blue Sea” is meant to be a comedy, a piece of frivolity. It’s a tale of frippery, if I can borrow a period phrase. There is nothing wrong with frippery but sometimes it can be too overdecorated or too flimsy. I thought this story was both. 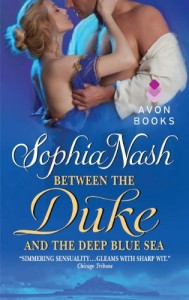 This book starts out with Prinny ordering six bachelor Dukes to marry. Who knew that Prinny was involved in making a gaggle dukes get married? This was the set up for the Kieran Kramer series (among others). In the Kramer series, Prinny stumbles through a secret door and commands all the members of the room to marry one after the other. In this book, the first Duke to marry is Alexander Barclay, the newly minted Duke of Kress, who lost his newly acquired fortune in a debauched bachelor party that has made the monarchy look bad. The debauched bachelor party led the Duke of Candover to miss his wedding and jilt an unknown bride at the altar. Har de har har. (I never knew when I was supposed to laugh in this book but I presumed this setup was supposed to be witty).

Alexander is a city boy and he does not want to be sent to Cornwall to rebuild, in one month, a crumbling estate while also hosting a house party so that he and his fellow ducal miscreants can find wives. Prinny is allowing Alex to use the treasury to restore the estate until such time as Alex can find a wealthy heiress. Alex isn’t a particularly nice guy. One reviewer at Amazon called him a frat boy and that is the perfect description. He doesn’t think much of the country folks (calling them tin as opposed to the gold of the burnished town folks, or in some cases fool’s gold). He is often prosing about making generalities about women being complaining, whiny, and overreaching. Unfortunately, none of these are recognized as flaws through which he must grow. Instead, they are part of what is supposed to make him charming and witty.

Alex comes across Roxanne Van­ derhaven, the Countess of Paxton, (Vanderhaven, really?) when she is hanging off the side of a cliff after her husband had tried to kill her. She realizes her husband’s murderous intent after she falls and he doesn’t return with the promised help. Instead Alex finds her hanging off the cliff and saves her. Roxanne begs for Alex to hide her after he tells her he will spirit her to a magistrate who will, of course, see that the Earl of Paxton is brought to justice:

He bit back a smile. It was unkind to find humor in any part of this unfortunate lady’s circumstances. “All right. Here is what I propose,” he continued. “Let us get you to the magistrate of the parish. He will sort this out and mete out the justice your de­ lightful husband deserves. No one is above the laws of the land, no matter what his station.”

After Roxanne convinces Alex that a magistrate is not the answer, they journey to his home whereupon hijinks occur. I’m pretty sure that the story was a mistorical. There was the outspoken valet of the newly made Duke of Kress who interjected his opinions in front of Prinny and six dukes, a couple of them royal dukes. There was the last name of Roxanne. Vanderhaven as the last name of British nobility seems quite rare. The entire modern tone of their discourse. The scene were a squatting crofter comes up to the Duke (Alex) and tells him that his family has been squatting for centuries and he’d like to go on squatting and Alex gives his blessing.

The story had a thing about details. It takes a fierce dislike to details. Who cares how Roxanne would dress at this house party attended by dukes and maids meant for Dukes. Why she would wear Alex’s Great Aunt Meme’s clothes. Or how Roxanne got her male disguise to attend her own funeral complete with a fake mustache. Or how she managed to take a horse from the Duke’s stable. Or to whom Alex lost his fortune or how Alex had even become a duke. Or why the Earl had a burial with no body. Or how Roxanne intended to assert ownership to her deceased father’s hidden fortune of gold guineas which were not left to her in the will.

Probably the most troublesome aspect of this story was its huge cast of characters and the non stop heavy handed sequel baiting. Not only are there several dukes at the party but there is one missing duke and everyone took turns wondering where he was. Things would occur that aren’t well explained to the reader but are clearly to be set up for later books. The unrequited feelings one of the guests had for another guest was more interesting than the furtive actions to be revealed later and the missing duke.

As I read the book I often thought to myself that there were definitely readers who would find the book funny and there were moments of humor and times in which the dialogue could bring a smile to someone’s face. I wondered why I couldn’t just lose myself within the text. Clearly this book wasn’t to be taken seriously. I kind of feel like the No Fun Police by pointing out the flaws in a book like this but every time I resolved to try to set aside my issues, a new problem would arise such as when it was revealed that the Duchess of March (clearly modeled after the Duke of Marlborough’s progeny) was only 17. Yet she was “the only female in the prince’s entourage”, the one female attending the morning after debauchery; the one female that was present with a bunch of men in a state of dissolute repair and undress after their bachelor; the one female who was present in His Majesty’s bedchambers with all the other dukes and the Archbishop of Canterbury. Oh, and the valet of Alex. I mean, What. The. Fuck.

The good thing is that Roxanne goes from trying to be the perfect wife to taking life into her hands, traipsing about as a man; helping rebuild (literally with her own hands) the crumbling manor; saving people from drowning. There are some nice women in the story with whom Roxanne forms a friendship. These ladies, of course, will be married off to the Dukes in latter books. The main conflict of the story I thought would be Roxanne being a) alive and b) married but it was primarily that Alex was instructed to marry someone wealthy and titled. The book was too crowded and the characterizations too weak for me. D

→ Jane
Previous article: REVIEW: The Temporary Wife by Mary Balogh
Next Post: What Jia’s Been Reading in February