REVIEW: Because of Jane by Lenora Worth

I picked this book to read because it featured a football hero. I loved football! I love romances! I’m always drawn to sports romances.   Unfortunately, other than the hero’s past occupation as an NFL quarterback, there was nothing sporty about this book.   This book is all about one really unlikeable woman falling in love with the aforementioned former quarterback and he returning her love, somehow. 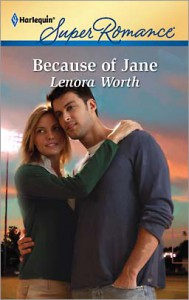 I disliked Jane Harper from virtually the first moment she opened her mouth and it was downhill from there. If there was ever a book that was going to strain my New Year’s resolution of finishing books I started, it was this one. As I read further into the book, I kept asking myself why I was spending time within someone (the heroine) who I so despised and who I thought deserved every humiliating, embarrassing thing that happened to her.

So what got my back up? Let me just quote from fourth paragraph of the first chapter when we are first introduced to Jane:

And if anyone could bring former NFL quarterback Lenny Paxton out of his self-imposed isolation after losing the Super Bowl, losing his beloved grandmother and then losing his cool in front of the world, Jane could. She also planned to get the scoop on the story everyone wanted-‘what in the world was wrong with Lenny Paxton?

Jane Harper has a Ph.D. in psychology. Her current job is as a life coach, probably because her ethics would get her barred from practicing as a psychologist in most states in the Union.

This assignment just might beat the band since she'd received a phone call from the notorious Sidelined sports magazine that prided itself on getting the scoop on the most interesting and infamous sport figures in the world.

They wanted her to write an in-depth exposé on Lenny Paxton. Jane had agreed, but only after she'd told the magazine's gleeful editor that she couldn't reveal any client/therapist secrets without the client's permission. While the editor wasn't too happy about that, the man had reluctantly agreed to her doing the article on spec. Now, Jane's main goal was to win over Lenny enough to get him to open up so his inspiring story could help other people.

Then Lenny’s agent contacts her to fix Lenny so that Lenny will follow through on his multimillion dollar endorsement deal. Jane sees this as the perfect opportunity to a) gain prestige and b) show her parents what a great success she is and c) make a ton of money.

Jane Harper, psychologist and relationship therapist, nonfiction author, authority on the human psyche and all-around consummate life coach and perfectionist might have just taken on the most challenging assignment of her career. She'd probably get network interviews and her name in People magazine.

Jane doesn’t admit that she’s on assignment with Sidelined magazine but she does tell him that she is there to clear out the “clutter” in his mind.   Jane is there to mess with Lenny’s head, fix him up so he will fulfill his endorsement deal, and gain his trust so she can exploit his story in a tabloid. Oh and Jane hates jocks. Because she was a mousey girl and never enjoyed sports and felt slighted by them all her life. Oh and despite the fact that she knows that he values his privacy more than his public image, she still plans to get the goods on him. Geezus. Is this the villain? Seriously, usually when we meet characters like these it’s a prelude to them getting their heads whacked off by the serial killer who is threatening the heroine’s life.   At some point in the book, Jane gives up on her scurrilous plans but she never really acknowledges how bad or wrong her objective is. She never comes to any conclusion that her goals as a life coach when it came to Lenny had almost nothing to do with saving Lenny and everything to do with propping herself up.   There was no big reveal moment for her.

I don’t understand why Lenny didn’t just kick her out and send her on her way. No, instead, he invites her into his home, lets her stay there and then takes her to various activities in his life like watching him coach his youth football team. He makes a deal with her: he’ll let her unclutter his life, if he can teach her how to let go.

I really don’t know how many violations of the pscyhologist’s code she has broken at this point, but lying and deceiving her victim, err patient, err client, isn’t where it stops. No! This is a romance and what is a romance without kissing and inappropriate touching between the psychologist and patient.

(Note, Tin Cup is not a good model for sports psychology if that is what the research source was).

I agreed that Lenny was hurting but being forced to recovery when his greatest crime was living by himself and not selling his wares to the general public didn’t sound convincing to me. He wasn’t alone. He had three ex wives, but good relationships with all of them. He was well liked in his community. His house is full of clutter and Jane comes the instant conclusion that maybe he is a hoarder and doesn’t guess the concept that Lenny explains himself:

He sat up, all his kind thoughts going out the screen door. "This isn't some weird freak show, doc. And my problem is fairly simple. Most of this stuff belonged to the woman who raised me, so I'm having a hard time getting rid of it."

Lenny seemed generally pretty easy going and cheerful. Yes, he was lonely. Yes, he was raised by his grandmother but it wasn’t like he was on a suicide watch and he had to have intervention or would die.   Jane pushes and picks at Lenny’s secrets, at his deepest hurts but with no discernable purpose other than to make him this ephemeral “better” person.   Maybe it was the timeline between how recently his grandmother had died and when Jane came to “fix” him. I don’t think even a year had passed.   Maybe if he had been shown to be more depressed, more of a danger to himself, I would have thought Jane’s interference was warranted but I was never convinced that Jane loved anyone but herself.   And frankly all the talk of clutter and unclutter and organization and making Lenny’s house “shine” after a thorough cleaning made Jane sound more like a manager at The Container Store than a psychologist.

Jane was already prancing with psychologist precision toward Candy.

I didn’t realize precision was a trait of psychologists.   The whole first chapter seemed like a wall of text as we were treated to the internal machinations of Jane’s desire to bag Lenny’s life story.   Later, we had scenes that contained Jane’s notes to herself which read more like diary entries than those of an actual psychologist.   I’ve read a number of psychology records and those people write notes like, well, doctors.

We had a breakthrough this week. I fell in the pond, but that won me some sympathy. That and getting a makeover from Wanda Lawhorn. Memo to self-‘Don't do that again, ever.

Mr. Paxton seems more willing to cooperate now. Our fitness routine and new diet have brought a healthy shine to his face, and we've managed to pick through some of the clutter. Note to self-‘no more sweet potato pie. Too many calories, even if it does have fiber.

I wasn’t even convinced that Lenny was an actual football player after reading this entry:

Then, just before the hit, he'd send the ball spiraling through space, watching, waiting, praying.

And then he'd go down.

Sometimes, he managed to score points. Other times, he missed the running back's outstretched hands.

I mean, I know that the running back can catch balls during screens and short passes, but generally a quarterback in the NFL is throwing to a wide receiver or, perhaps, a tight end.

In sum, I felt this book was unconvincing on all levels. I never believed in Jane, the psychologist; Lenny, the football player; or the romance between the two.     D

→ Jane
Previous article: First Page: Unnamed Contemporary Romance
Next Post: Dear Jane: What eBook Reading Apps Should I Use on the Laptop?