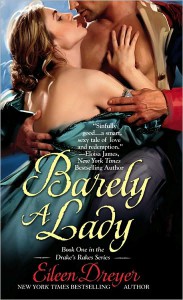 When a friend told me that you had started this historical series, despite the fact that I’m pretty much Regencied out, I was delighted. After all, you’ve written some wonderful category novels such as “A Soldier’s Heart,” and “A Rose for Maggie” that I love. After I finished it, all I could do was shake my head.

Olivia Grace works for a jumped up harpy who couldn’t pass up the chance to push her three daughters into the polite society gathering in Brussels before the showdown with Napoleon. Olivia is surprised when Lady Kate, aka the Dowager Duchess of Murther, sits down beside her at the Duchess of Richmond’s ball thereby blowing the cover Olivia has constructed to hide herself from the evil villain in her past. Yes, Gervaise, her former husband’s cousin who has hunted her like a fox because he lusts after her, has found her at last but, in the nick of time, the battle begins followed by Lady Kate and her unconventional household taking Olivia in to help nurse the wounded.

Except one of the wounded is a man Olivia never thought to see again: the love of her life and her former husband. Jack believed the lies Gervaise told about her five years ago, called her a whore, challenged her cousin to a duel because he thought they were having an affair, threw her pregnant self to the curb with no money then divorced her. Only Jack is badly injured, was found on the battlefield in a French officer’s uniform and looks to have his own past secrets coming home to roost. Will the truth be discovered before all the many evil villains lurking in the shadows attack?

As I read deeper into “Barely a Lady,” I should have stopped. But I kept thinking that if anyone could take situation loaded with every trite trope in the genre and turn it around, you could. I was wrong. This book has aristocratic spies, a hero with amnesia, brain injury causing a character to be only able to speak in metaphors or symbols (Lady Bea) – and btw why on earth was she needed? -, past and present Big Misunderstandings during which the hero acts like a dickwad, revenge, eeeevil villains, multiple PsOV including many from secondary characters, a heroine who ought to loathe the hero but who instead just can’t stop herself from dissolving into lust around him, a supporting cast of characters who immediately support Olivia in the face of all contrary evidence unlike the rest of the ton who have spurned her for five years, Lady Kate’s ragtag household which has a pregnant housemaid, a former boxer and a pickpocket – who all adore Olivia – and the beginnings of a series complete with future heroes and heroines (hence the multiple Psov) sprinkled throughout the narrative. It’s even got a cringe worthy series title by which a lot of the future heroes are already known in this society: Drake’s Rakes.

In answer to the question of why I kept reading as the cliches piled on I offer the response that I wanted to read the climactic scene in which Olivia finally, after suppressing her emotions for the majority of the book because the doctor said that reminding Jack of the memories he’d suppressed or temporarily lost due to his head injury would hurt him, lets him fucking have it. And then I wanted a grovel scene to outgrovel just about any other groveling I’d read in any other romance book. I wanted world class groveling. I wanted Oscar winning groveling from a man who seemed to have done everything to Olivia except kill her dog. Well, you supplied the scene in which Olivia Reveals Almost All to a shame filled Jack. And it was pretty good. This is followed by almost the entire household piling on Jack and telling him what a shit he is and how fabulous Olivia is. Then Jack grovels over the course of quite a few pages and chapters. And that was good. Only it’s not enough.

Because then Jack didn’t seem to know when to stop pouring ashes on his head and crawling to Olivia begging forgiveness and Saint Olivia, despite five years, FIVE YEARS!, of hell on earth appears ready to forgive and forget way too easily for me to believe. And I find that I can’t believe either his 180 change from the rat bastardness described as his past actions. I also don’t give a damn about whatever spy nonsense will be carried on over the course of the rest of the series or the fact that Gervaise gets what’s coming to him.

I think I’m going to stop reading romance novels using Waterloo as a backdrop. Balogh gave me Disney Whores, this is where Putney started the pile that is Shattered Rainbows and now here’s Olivia the All Forgiving with Jack the Asshole. When I close a book and feel sorry that the two main characters are facing a life together it’s a bad sign. When I don’t even feel sorry for the heroine because I feel she’s too silly, it’s even worse. D