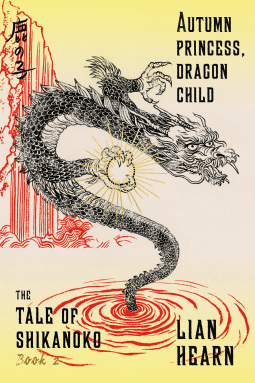 A self-assured warrior stumbles into a game of Go that turns fatal. An ambitious lord leaves his nephew for dead and seizes his lands. A stubborn father forces his son to give up his wife to his older brother. A powerful priest meddles in the succession to the Lotus Throne. A woman of the Old People seeks five fathers for her five children, who will go on to found the Spider Tribe and direct the fate of the country.

As destiny weaves its tapestry in Lian Hearn’s Tale of Shikanoko series, an emotionally rich and compelling drama plays out against a background of wild forests, elegant castles, hidden temples, and savage battlefields in Autumn Princess, Dragon Child.

I was psyched after I read the first book in this series “Emperor of the Eight Islands.” There was an interesting time period and place, oodles of fascinating characters, some magic, and lots of danger. I was looking forward to book two and itching for the next two to be released. After finishing this one though, I’m questioning going on with the series.

There is a bit of recap to start this one off but really, even with the (extensive) character list at the front of the book, it’s going to be hard for a reader to begin with this book. Shika wanders back to the mountain wizard who created his deer mask – who is thoroughly pissed at Shika for letting it get broken – and begins to tell the old man all that has happened. The Kingdom is in an uproar, factions are fighting and the true Emperor of the Eight Islands – a small boy – is on the run with a young woman who should have been a shrine maiden.

Shika has failed in defying the cruel Lord Abbot who wished the Emperor killed. But then since Shika got so little training in the use and powers of his mask, can he be totally blamed? The wizard and Lady Tora – a powerful sorceress – certainly think so. Now with allies turned against him for his actions and his weapons ruined or broken, it’ll be a while before Shika can try and find the boy Emperor and attempt to make things right. Meanwhile, conniving Masachicka is desperately trying to ingratiate himself with both sides of the war, neither of whom truly trust him and with his life on the line should he fail. Things aren’t going his way – at all.

Aki and the boy Emperor flee to where they hope to find sanctuary and Aki sees the truth of his link between Heaven and earth as he is recognized by all the animals. It is his prayers that keep both in balance and harmony thus affecting all living creatures. But these two are up against powerful men who are determined to see them dead and not by easy or painless means.

Throughout the book there is a casual disregard of the powerful, ruling classes for the workers but also for those of their own class who have failed them or who they think of as weak or useless. The men also see most women this way, as useful for alliances and keeping a home but not of intellectual worth. There are lots of fantasy elements such as the deer mask, the sorcerers, the demon children, swords which recognize their owners, a magic lute, and a box with some gruesome contents.

There is also a fair amount of telling over doing. Way more telling than in the first book. Chapters of telling sprinkled with a little bit of action. And prescient animals all over the place. Then there are the five little boy children born of the sorceress who have magical powers, grow a year each month and can be annoying at times much like children in the classic Japanese Godzilla and Mothra movies. There’s also a creepy relationship between an adult man and a child he saved from death and whom he’s grooming to eventually be his wife. Even though nothing has sexual happened, the whole thing makes me squirm.

The dark feel of this series is shown again in characters who are killed off and the violence of the deaths (stabbed in the throat, head sliced off, snakebite, torture). Lots of death here. Lots and lots and pain and regret and loss. Yet for the number of people and events going on, this one has some long boring, drawn out parts. And death. Tons of that going on. Wait, I already mentioned that.

After the excitement and rush of the first book, this one is much slower, much less gripping but with more death, darkness and telling over showing. Then at the end, when I’d almost sunk into a stupor, a books worth of action gets crammed into a little space as all hell breaks loose. Given how this book and I didn’t click, I’m not sure I’m up for going on. D