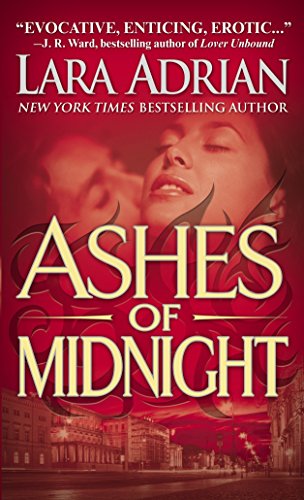 I really fell in love with your series with the book featuring Tegan and Elise, Midnight Awakening. I believe it was in that book that we were introduced to Andreas Reichen. Andreas is a German vampire whose entire “family” was killed during a purge of Darkhaven homes who are perceived to be impediments to the ultimate rule of the bad vampires.

Andreas “gift” is overtaking him, spurred in part by his loss of control following the eradication of his family. Andreas is pyrokinetic and his rage literally fuels the fire. As he seeks out revenge against those he knows betrayed him, he loses his ability to harness both his gift and his bloodlust.

Claire Roth is the wife and breedmate of Wilhelm Roth. Roth and Andreas have always been at odds. Roth has been promised power in exchange for helping to eliminate those who stand by the Order, a group of Generation One vampires who hunt down rogue vampires and engage in an ongoing battle to keep humans safe. (As I was writing this review, I had to go back and look at previous books because there is little in this story that explains the nature of the conflict. It’s presented in a very elemental fashion. Andreas is part of the good guy team and Roth, part of the bad).

Claire and Wilhelm maintain a cordial existence but Claire and Andreas have a past. The two fell in love, but Andreas left, fearing his gift would ultimately harm Claire. Hurt and vulnerable, Claire fell easily into the hands of Wilhelm who poured on the charm to win her. The two settle into a peaceable yet far from loving relationship. Here’s where the story breaks down for me.

I was intrigued by the initial play on the breedmate concept but as the world in Ashes appeared to play fast and loose with the original canon, I not only lost interest but became frustrated. There ominous warnings regarding Reichen interfering with the blood bond between Claire and Wilhelm but there were no real repercussions.

Under the mythology you have set up, a breedmate (a female specially capable of breeding/pairing with vampires) has intense sexual and physical reaction to her mate when she drinks the mate’s blood. If she doesn’t drink the mate’s blood, she essentially condemns herself to die. Therefore, in order for Claire to have lived the life she has, she would have to regularly take blood from Wilhelm which implies that she also would be having sex with him, wonderful, orgasmic, blood pumping sex. Yet, this is never, ever addressed. Further, as Claire and Andreas bond, we are told that Wilhelm can tell through the matebond when Claire receives pleasure. Yet, we also know early on that Wilhelm cheats on Claire regularly. What impact does that have on her? What would that do to experience your mate’s pleasure while he is getting it from someone else? These questions are totally unanswered.

I was further disturbed by the fact that Andreas and Wilhelm were both born and bred in Germany, had lived there for years. Yet both of them act like characters from Die Hard.   Of course, Roth is John McClane, big, brawny, capable of handling every task with glass in his feet all the while cursing up a storm. Roth is no more German than Mongolian Beef is Chinese cuisine. His entire aspect from his attire, to his mannerisms, to his way of speech (replete with Anglicized curse words), and rhythm of speech, bespeaks of a non European.

If there is ever a place that diversity would be welcomed, it is the paranormal world. I mean, we have shapeshifters and vampires and aliens. Surely, we can have a few non white Anglo characters right? The most German that a reader is provided is the reference to Claire as Frau Roth a couple of times. I kept wondering what the point was of having German characters without providing us with any international flavor.   It further struck me how homogenous even the paranormal genre is that even a German character doesn’t appear to be any different than the standard Hollywood action hero.

Finally, the idea that one woman’s love could save him from his beast has been done before, not just in the ouvre of paranormal but in this series. Ashes of Midnight is nothing more than one super alpha male being saved by the love of a great woman. There is no nuance in this story and because it’s the same plot recycled from previous stories, there is no suspense either.

The story arc focuses primarily on Andreas and his battle over being consumed by his own fire. Claire has no character arc as serves only as the paranormal cure for Andreas’ illness. I think this is the last of the Breed series for me.

I feel compelled to explain the grade here for a moment. I think the prose is competent, if not a little melodramatic. But because the German background of the characters was so lacking and because the book deviated, I felt, so far from the original canon in order to drum up some conflict and then ease into an easy resolution, I cannot give this a better grade than any book in the series. D