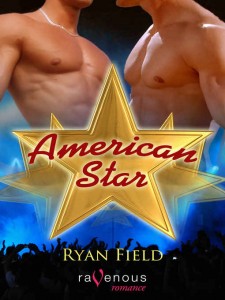 There is this livejournal community called weepingcock wherein users collect literary outtakes of tragically bad sex scenes. In reading my fourth Ravenous Romance ebook, I’m convinced that there is some conspiracy between WC and RR, or at least some hidden symbiotic relationship because I haven’t read four books in a row from one publisher that so perfectly fit the mission of one livejournal community. I suspect that the WC users will subsidize RR press should it falter in this troublesome economy just to provide the community material.

American Star is thinly veiled fan fiction of the American Idol reality television series featuring aspirant Terre/ance* (tm Divas). Terre/ance is a manager at a tanning salon in Bucks County, Pennsylvania. Ostensibly, Terre/ance is dating Kevin, his boyfriend since high school and owner of the tanning salon. Terre/ance sees a notice in a newspaper about auditions for a singing reality show. Terre/ance decides that this is his opportunity to launch his singing career. He does not tell Kevin because Kevin is always looking for an opportunity to be derisive of Terre/ance.

When I say thinly veiled, I mean American Star differs from American Idol only in that the word "Idol" is not used. Terre/ance is selected to go to “Hollywood” from the auditions and undergoes a grueling competition while in Hollywood. After the group of singers culled from the auditions are reduced to twelve, the singers are subject to the votes of the public who can express their opinion as to who stays and who goes by calling special phone numbers. There are three judges: a woman with one hit; a singer turned producer who is quite heavy; and Marcus, the snide, cruel judge who has been outrageously successful in all his endeavors. Oh, and a host, a slim man some apparently think is gay (and in this story he is).

The singing competition is really a vehicle for Terre/ance’s sexual exploits. Terre/ance, to put it kindly, is loose. A young man comes to tan at his salon and Terre/ance is entranced. Fortunately for Terre/ance, Jude is a singer too and when they see each other at the singing auditions, the two sneak away to the bathroom to while away the time. Jude confesses to Terre/ance that he has a “mutant penis.” Apparently it is enormously large. So enormous that it is described thusly:

Then he spread his legs and slowly lowered his zipper. It fell from his jeans like a roll of paper towels unraveling across the kitchen floor; it was already semi-erect and growing longer and thicker by the second.

Terre/ance recovers from his initial shock at Jude’s Bounty and begins to fellate Jude. I didn’t realize it at first, but Terre/ance identifies all his cocks via smell. Jude’s cock “tasted a little salty, but it smelled like clean, fresh soap and water.” Please pay attention, there will be a quiz on this later. While Jude’s monstrous dick physically prevented Terre/ance from engulfing Jude entirely, “he packed as much of Jude’s big dick to the back of his throat as he could.” Jude begins to come and Terre/ance invites him to shoot the sperm all over his face

A second later, the huge monster exploded all over Terrence’s face. It hit his skin hard enough to make his head jerk back. The aroma was intoxicating: sugar and bleach and honey mixed into one. And while he continued to milk Jude’s balls, he blew his own load all over the bathroom floor.

As an FYI Chlorox Honey Bee frangrance is stocked right next to Bounty at your local supermarket next to the burp pads:

he finally opened his eyes again, he reached for a piece of toilet paper and cleaned the last few drops of come from Jude’s dick. He wanted to stay there on his knees and stare at it for the rest of the day; he could have put it over his shoulder and burped it. But all he had time to do was place it in his palm, hoist it up and kiss it good-bye.

When I shared this scene with others, I was confronted with a series of “You are making this up” so I took a screen shot. Jude and Terre/ance both make it to Hollywood and they make promises to meet up with each other before the show starts up.

Terre/ance returns home and tells Kevin of his plans. Instead of angry Kevin, Terre/ance is confronted by tender Kevin and by tender I mean that when Kevin says–“That’s it, bitch…Get naked for me. Wiggle that hot ass. I know how you like it”–it’s in a totally loving manner. Terre/ance revels in the smell of post-gym, pre-shower Kevin:

Terrence licked the rough stubble beneath his chin while Kevin’s two fingers slowly probed his anus. Kevin hadn’t showered that morning after his daily workout at the gym, and his underarms smelled like raw onions and meat. Terrence took a deep breath and smiled.

Again, not lying. So Terre/ance then embarks on his journey toward stardom. On his way there, he stops to fuck the limo driver Joe. For those at home playing the ball/penis/smell bingo game, Joe smells of “inexpensive cologne. It wasn’t strong, but it smelled like musk and spices, like a man should smell if he were to wear cologne of any kind.” Their sex play? Some kind of manic circling:

While they kissed, their tongues went in wet, rapid circles, swallowing each other’s spit and coming back for more….Joe’s tongue continued to go in circles and he moaned inside Terrence’s mouth a few times.

As an aside, this author appears to be quite taken with circular imagery. Terre/ance’s ass is described as a beach ball (despite being willowy of frame), and a bubble butt. Terre/ance has a tendency to grind his ass in a circle (which makes some strange sense given his beach ball/bubble butt, I guess). “He didn’t have to buck his hips or move them in circles.” “Kevin moaned and sighed while his hips began to grind in slow, meticulous circles.” “He shoved his tongue into Terrence’s mouth and rolled it around in violent circles.” “Kevin’s dick was still inside him and he was rocking and grinding in circles.” “…pointed the tip directly into Terrance’s pink hole and circled the opening.” “The entire cock seemed to ache with erotic places that could make his eyes spin in circles.” “…causing the entire bed to vibrate while Terrence’s head jerked around in circles.”

Another redundancy is Terre/ance olfactory fetish. At one point, Terre/ance finds himself jerking off while staring at his straight roommate’s sleeping form. Figuring that the roommate is the one person who is not hot for him, Terre/ance picks up the roommate’s sweaty, discarded sock:

Terrence licked his lips and started jerking again. He knew he couldn’t just get out of bed and suck him off, but he needed more. So he reached down to the floor and picked up one of Justin’s sweat socks. He pressed it against his face and sniffed back. ….A moment later, Terrence pressed the dirty sweat sock to his nose, inhaled as deeply as he could and blew his load all over his stomach.

I would be remiss in this review if I didn’t acknowledge that there was a plot. Terre/ance is a great singer whose talent threatens that of another contestant, Payton. Further Terre/ance has to fight for Jude’s attention. Jude may want to win the competition more than he wants Terre/ance. Because of the plot, I feel like I have to give this one a D.

*The spelling of the main character’s name changes throughout the book from Terrance to Terrence. At least once, the misspelling occurs in the same paragraph. This is not the only editing issue though. My favorite sentence besides the burping one was “Joe wasn’t into a lot of raunchy dirty talk, but there was something about his strong, viral movements that was just as exciting.”

This book can be purchased at many etailers