Anyone who listens to the podcasts will know that I (and Sarah Wendell) are huge fans of werewolf books, particularly those that involve a pack dynamic. I was so excited to read this story. The promotional materials refers to the heroine being an Alpha and a “strong leader.”  Apparently being a strong female alpha means finding the right male warrior alpha to take care of yourself and your packmates because you are too weak in all areas to take care of yourself. 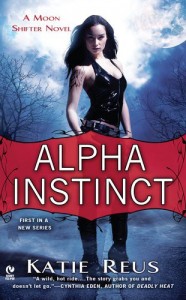 Alpha Instinct is about this poor pack of she wolves who are left alone after all the men (and pregnant women) in the pack were poisoned. Connor Armstrong, a shifter from the heroine’s past returns with a new pack of his own, all warrior caste and alpha males to join with the women’s pack because the women can’t protect themselves. Not only can the she wolves not defend themselves, but they CANNOT EVEN PROVIDE FOR THEMSELVES.  Yes, this set the table for the entire book.

“At least we know him and his brother, and if the Councili has officially recognized them it means they have the financial wherewithal to support all of us”

This is said by the “strong” female warrior to her cousin.  *weeps* They can’t even financially support themselves, you guys. Not only can the chicks not protect themselves nor can they provide for themselves, they are also the last to know if they are “mates.”

She was a smart-ass. Absolutely perfect. And he was absolutely screwed, because she was human. Matings between shifters and humans weren’t exactly accepted in all circles. On either side. For all he knew, she hated his kind anyway. His inner wolf didn’t care, though. It recognized her on a primal level. When he’d been barely seven, he’d asked his father how he’d known his mother was his intended mate. His father’s green eyes had sparkled as he’d explained that some shifters knew immediately but most didn’t. And males almost always knew before females did.

The women were so dense, apparently not being able to tell that the males were wanting to have sex with them. I guess this is consistent with the portrayal of the women not being able to even financially care for themselves.

After he’d gotten back from the bank, he’d been putting out fires between his guys and Ana’s packmates. Small, unavoidable spats that were based more on sexual frustration than anything else. The females didn’t seem to realize it, but he could see it clearly. Most of his guys had been lone shifters, roaming the globe for decades or longer until he and his brother had convinced them to settle down. Now that they were on a ranch full of single, beautiful wolves, they wanted to mate in a bad way. Their most primal instincts were kicking in and wanted release.

She stared at him, waiting and wanting him to do something to ease the ache she felt inside. She briefly thought about asking him why he’d left, but bit the question back. Maybe there had been someone else. That thought stung impossibly deep and she didn’t want to hear the answer. If she pushed harder and he told her there had been another female . . . that would be worse than not knowing. With his hard length pressing against her abdomen and distracting the hell out of her, it was hard to think of anything other than what he would look like naked. Yes, she wanted to keep some control, but she was also a female and wanted him to want her as much as she did him.

So in sum females don’t know about sexual tension. And because she was female she wants to be wanted. Unlike males.

The basic plot in this book is that  Analena Cordona is the head of her pack, a pack that has had all its male members killed.  Ana and her pack live on a ranch but recently have been subject to increasing vandalism from a male alpha who wants Ana and her girls to assimilate into his pack.  Ana’s solution is to find another alpha male group who is more amenable than her neighbor Taggart.  Ana is an alpha wolf but she isn’t strong enough to defeat Taggart (and apparently she isn’t a good enough fighter to take down someone who has more strength than her).

Taggart plays a classic villain character.  A trill of the keyboard should accompany his every entrance on stage.  He grabs his crotch in the first scene:  “He shrugged and had the nerve to grab himself. ‘I wanted the exercise. Besides, you should get to see what’s going to be yours soon.’”  He threatens violence even though we are told Pack violence against female wolves was rare.  He calls her a bitch (is that really an insult to a werewolf?) and turns tail and runs when he spots a stronger alpha male.

Connor Armstrong appears with his brother Liam and a whole host of alpha males ready to defend Ana’s pack and mate with them.  When Conor had disappeared from Ana’s life, she wondered why. In keeping with the obvious and unoriginal nature of the story, it was because Ana’s father didn’t think he was a fit mate for Ana and so Connor ran off.  He’s back and with a pack of his own, he has something to offer because while Ana and three of her cousins and sisters are alphas they are not Alphas.

Even the thought of one of her sisters at his mercy made her see red. “We might be alphas,” She gestured to the four of them at the table, “but none of us are Alphas and certainly not of the warrior class.”

All true Alphas were also warriors, though warriors weren’t always Alphas. They were just damn good fighters. Warrior shifters were so different from the rest of the population. Bigger in human and shifted form, they seemed to be born with slightly different DNA, even from their shifter counterparts. They embraced their animal side a lot more than their human one. It’s what made them the protectors of the rest of their kind. Ana might hate it and crave complete independence from outsiders, but she wasn’t an idiot. She wasn’t an Alpha or a warrior, and if it came down to it, it was better to embrace someone like Connor as pack Alpha than an unknown.

I guess in this world only the men are born with a warrior shifter gene? She’s only an alpha, lowercase “a” as are all her fellow she wolves. In sum, the worldbuilding includes alphas, Alphas, Warrior caste Alphas, and betas. There is additional external tension provided by vamps and weres coming out  of hiding about 40 years ago.  They are viewed with suspicion by the human populace. This is supposed to add a layer of external tension by bringing the human police to their doorstep for perceived problems but instead it read like a retread of other paranormal worlds.

I didn’t find the world building to be all that consistent either. Ana complains that the North American Council won’t pay attention to their little tribe of female wolves, but obviously the female wolves were important enough to have two Alphas ready to go to battle over them. If female wolves were important yet viewed as weak and ineffective (which they were), then it made sense that the North American Council would award them to some Pack that they wanted to elevate in power instead of leaving them to flounder and possibly die out.

Ana and Connor renew their past acquaintance, fight off the bad guys, and prepare for all the girls to be nicely matched up with the boys.   The world building was  uninspired.  There was no tension, either suspenseful, emotional, or sexual, and the depiction of these poor little she wolves who couldn’t even financially care for themselves was depressing.  D