You open the book with a poem by the famous Pre-Raphaelite painter and poet Dante Gabriel Rossetti.

Of Adam’s first wife, Lilith, it is told

(The witch he loved before the gift of Eve,)

That, ere the snake’s, her sweet tongue could deceive,

And her enchanted hair was the first gold.

And still she sits, young while the earth is old,

And, subtly of herself contemplative,

Draws men to watch the bright web she can weave,

Till heart and body and life are in its hold.

The rose and poppy are her flower; for where

Is he not found, O Lilith, whom shed scent

And soft-shed kisses and soft sleep shall snare?

Lo! as that youth’s eyes burned at thine, so went

Thy spell through him, and left his straight neck bent

And round his heart one strangling golden hair.

The poem has a literal significance to your tale: the villain of this gothic romance is the Lilith, first wife of Adam, Mother of the Demons, and Queen of the Night. As the hero, Hux, explains:

According to ancient Semitic scriptures, she was created by God as the first wife for Adam. Though her beauty was unparalleled, she was querulous and headstrong. When she refused to take a subservient role, Adam complained to God. God gave him another wife, Eve, and Adam cast Lilith aside. Enraged, Lilith set the earth aflame and fled amidst the smoke of burning poppies. She has ruled the darkness ever since.

She’s done nothing but become more evil over the centuries and now, at the height of Victoria’s rule, Hux says, the Mother of Demons has a horrific goal.

Lilith is building an army, and when her power is great enough, she plans to overtake our world. To create her own empire of everlasting hell.

Our hero, Lord Lucien Langsford, Earl Huxton (Hux to his—none of which exist in this book—friends), has been tasked with defeating Lilith. He has this burden because when Hux was young, he was blamelessly responsible for a horrible injury to his brother John who subsequently took his own life. Years later, while living in Italy, Hux met a woman. He describes the encounter to Abigail:

“Her name was Isabella Del Blanco. We met at a masquerade in Florence. She was the young widow of a wealthy merchant and the most beautiful woman I had ever seen. I still remember the dress she wore that night: layers of white and gold that floated around her. I thought her an angel descended into our midst.”

He was looking at me, but his eyes had that distant focus again. I knew he was seeing his wife as he had that first time. Reliving that moment forever imprinted upon his memory.

“I had to know her. But she was surrounded by admirers, and I—so used to the attention of the fair sex—I could not get her to notice me. So I bided my time. I waited until I saw her slip out to a balcony, and I followed her there. I pressed for an introduction. But it turned out she knew me already—she had heard of my exploits from her friends, she said, and she wanted to know if the rumors were true.”

“Rumors?” I could not help but ask.

A dull flush spread over his cheekbones. “About my … stamina. ‘Twas a trifling matter grossly exaggerated.” He cleared his throat. “At any rate, she seduced me that night. Then and there, on the balcony overlooking a piazza brimming with revelers, she took me as no woman ever had. I had thought myself experienced in carnal arts, but she overwhelmed me completely—with her beauty, her lack of restraint. I had never felt this way with another woman. The next morning, I asked her to marry me. Within a week, we were wed by special license.”

God would pardon my brother’s sin and let John be at rest at last. Michael gave me a blessed sword and knowledge of the words and ritual to cast a demonic force from its humanly shell. 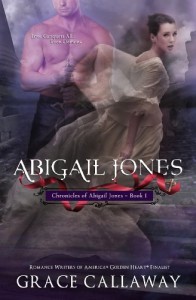 This back-story is too bent for me. First of all, the idea that Hux is so good in bed—it’s already been established he’s hung like an elephant—that the Queen of the Night finds him just to try out his goodies, sticks around to make him miserable, gets pregnant with his son, and then suffering a post-partum depression caused by the fact she really wanted a girl, kills the kid and dumps Hux all seems beyond far-fetched to me. Add to that, a mystical messenger from a mean God—Hux, who is completely innocent in his brother’s suicide, has to take on the Biggest Bad because God is keeping John is some sort of nasty purgatory and he won’t let him out unless Hux rids the world of Evil—and a bunch of hell-bitch women who are horrifically horny and trying to destroy the world one cock at a time and you have a story so lacking in credibility, it’s ridiculous.

Abigail’s role in the novel is equally preposterous. The young, virginal, grey-eyed heroine has all her life suffered from scandalous and wicked visions. When she touches certain objects, she is transported into the experience of another. These experiences are all sexual and usually depraved. As a girl, she lived with her aunt who, aware of Abigail’s affliction, kept her away from much of the world. But, beloved Aunt Agnes passed on three months ago and Abigail threw herself on the mercy of her aunt’s oldest friend, Mrs. Beecher who is, of course, Lord Huxton’s housekeeper. Abigail, who has no experience at doing anything but reading—she’s a whiz with all things bookish—becomes a chamber maid in the Earl’s home, the dramatically named Hope End. Mrs. Beecher, from page one, warns Abigail to stay far away from the Earl, who is known for his voracious sex life and mysterious past.

Abigail tries to obey Mrs. Beecher, but, one night, when she, Abigail, can’t sleep, she sneaks off to the Earl’s library where, while she is hiding under his desk, hoping he won’t discover her, she watches him stroke his massive member. He, in the throes of passion, kicks out his foot, and knocks over Abigail’s hidden candle. He stops playing with his “truncheon”, hauls Abigail out, and, by the next day, has asked her to become his personal secretary.  Next thing you know, she’s in love and trying to get him to relieve her of her chastity and he’s in love and trying to behave like a gentleman—which for him means he can do stuff to her and, after he protests, she can do stuff to him and his truncheon, but they don’t have intercourse.

Furthermore, there’s the Lilin who keep showing up and whom Hux keeps having to seduce and kill which is no fun at all. As he reassures Abigail,

“My encounters with the Lilin have never resulted in the usual outcome.”

Not understanding, I tilted my head.

His mouth took on a wry bent. “When I say there is no pleasure in it for me, I mean it in the literal sense. I use sexual means to entice them, yes, but I do not participate for myself. To be blunt, there is no conclusion for me.”

My brow furrowed as I tried to grasp what he was telling me. “You mean you don’t—”

“I do not spend, Abigail,” he said succinctly. “It has been several years since I have experienced that particular pleasure with another person involved.

As Hux wages war on the Lilin—through a series of one-night stands—Abigail realizes that her visions are somehow connected to the Lilin. She worries she could be one of them and yet she knows she’s not an evil, humanity destroying ho. Plus, there’s this magic necklace she wears that somehow protects her from the Lilin….

It all seemed to me to be completely absurd. Neither Hux nor Abigail is remotely credible, and their deep love for each other didn’t have any basis other than lust and a desire to rid the world of evil sex-obsessed demons.  Reading this book made me long to watch Buffy and Angel kiss and kick some ass—and I wouldn’t mind it being those of Hux and Abigail.

It’s fair to infer, from the Author’s Note, this book was inspired by Jane Eyre. I like Jane Eyre (hate Wuthering Heights) and, as I read this book, I could see the effort put into replicating that sort of eerie Gothic tale. But the storyline here is so crazy, the leads so extreme, and the morality so discomfiting, I couldn’t enjoy the ambience of the book. I’d give it a D.