REVIEW: A Temptation of Angels by Michelle Zink

I admit it. The lovely cover is what made me stop and give your new novel a second look. I’m a sucker for pretty covers, and I thought this one was highly effective for the genre. If only I could say the same for the content. 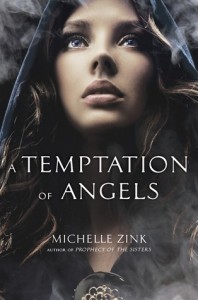 Helen Cartwright is the sheltered daughter of a British family. That all changes when her mother drags her out of bed one night and tells her to flee through a secret passage. She eventually does so but not before everyone else in the household is murdered and the family estate set on fire.

Before being told to flee, Helen was given a slip of paper containing a name and address. Left with nowhere else to go, she seeks help there and meets two brothers named Darius and Griffin. She learns that she, along with the brothers, are the last descendants of angels charged with the task of protecting Earth’s past, present, and future.

Over the past few months, their fellow descendants have been hunted down and murdered until the trio are all that is left. Now it’s up to the three of them to find the people responsible and stop the murderers from seizing control of the item that can grant them dominion over the entire world.

Summarized succinctly like that, it seems like there’s a decent story to work with here. Some interesting things could have been done with this foundation. But that is not at all what I got.

First of all, these angelic descendants have got to be the stupidest guardians of the world I’ve ever had the misfortune to read about. Let’s get this straight. Members of your order are being hunted down and killed one by one. What do you do? Do you run, hide, or stay in your house and do nothing? Two of those options make reasonable sense. One does not. Guess what they chose?

Secondly, the worldbuilding follows no logic I can parse. According to the rules set forth in this world, the angelic descendants aren’t allowed to learn about their heritage until they turn 17. Why? Do they go crazy? No clue. If there was a reason, I missed it. But that’s okay — instead of giving them straightforward training and education in preparation for the momentous responsibility of watching over the world, their parents teach them “games” that are really lessons in disguise. And when I say games, I don’t mean strategic ones like chess. I mean games like walking down the same street every morning.

WTF, why? There is no reason for this. If you’re waging an epic war against demons, wouldn’t it make sense to teach your next generation properly? This is the world we’re talking about here. Shouldn’t we take this task a little more seriously? Why would you teach your successors in the most obtuse, vaguest way possible? It should have occurred to someone that if all the adults were wiped out, the kids would be in trouble due to lack of adequate training. Way to go, good guys. Way to go. No wonder you’re losing.

This doesn’t even get into the fact that this book supposedly takes place in London. Sometime. In the past. I’m the first to admit that my knowledge of historical London is not so great. I don’t pick up on details the way I know other DA folk (reviewers and readers) do. But this book had no concept of setting whatsoever. There were points in the book where I had to stop and make sure it was a historical, not a modern-day story. Maybe I’m asking for too much, but you have to give me something to work with. You can’t tell me that something takes place in historical London and expect me to believe it if there are no period clues beyond wearing a corset.

And then there’s the romantic subplot. Could it have gotten any more paint by numbers? When Helen meets the brothers, I was truly fearful. Great, she’s going to be torn between two opposites — the nice brother and the mean brother. Could this get any more predictable? But then the book surprised me (the one and only time this happened, by the way) when it revealed the mean brother’s heart lay elsewhere.

That said, this doesn’t mean I was keen on Helen hooking up with the nice brother either. I’m tired of this insta-lust in YA novels. Do teenagers fall in lust at first sight? Sure. Am I going to buy it in a book where the heroine’s parents were just murdered and her house burned down? Not so much. Priorities, people.

Unfortunately, the circumventing of Helen being torn between the brothers didn’t mean we escaped from the love triangle trope. Another prospect named Raum is soon introduced and he’s even worse. This is not just a bad boy; he’s their enemy. I would rather Helen had been torn between the brothers than this. There were moments in the novel where Helen would choose to protect Raum and I saw no reason why, especially when you take into account his involvement with her parents’ deaths. It made me think less of her. We’re supposed to believe she’s torn up over their deaths, that she wants revenge. And yet she continually protects the guy who killed them.

Perhaps the book intended to portray Helen as conflicted and torn between all her various allegiances. The story doesn’t make sense otherwise. But the execution falls flat. As a reader, I didn’t find Helen conflicted. I found her TSTL. This was made even worse because all the boys in her life — even the nice brother — were jerks, especially when it came to Helen. They all treat her like an idiot, including the one who’s supposedly in love with her. It left a bad taste in my mouth.

There could have been a good book somewhere in all this, but the major flaws with the romance and worldbuilding prevented me from seeing it. I have no idea if this is the start of a series and I couldn’t care less. Combined with bland writing, I wish I’d spent my time reading something else. D