REVIEW: A Shot of Sultry by Macy Beckett

This book had me smiling up until about Chapter Nine when I started feeling uncomfortable by some serious misogynistic overtones wrapped up in a “I’m so cute” package. It was insidious and likely unintentional but I ended up having rage face for much of the latter half of the book. 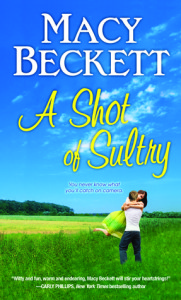 The hero, Trey, had a less than honorable discharge from the Army and if he takes a security job in Dubai for two years, his discharge will be upgraded to a general discharge. This will go a long way in repairing his reputation and his relationship with the Colonel, his father.

The heroine, Bobbi, is running from legal bills and her own smeared reputation which she suffered after the release of a documentary that falsely accused a company of misusing migrant workers. She’s reduced to filming weddings rather than documentaries when she’s offered an opportunity to film a reality TV show of sexy southern boys and their dating habits. She returns to Sultry, Texas, to live with her brother Luke (hero of a Sultry with Twist) and begins shooting footage for the reality TV project that may or may not get picked up. Luke’s best friend, Trey, is strong armed into being one of the subjects. The other is Colton who is a hound dog nailing everything this side of the Mason Dixon line. He “uses” his backseat of his police vehicle more than an other deputy out there. But Colton is clearly the next hero. His little heart was hurt when the preacher’s daughter left him and the town and didn’t return.

The interfering old person in this book is Judge Bea who issues a nonsense injunction in order to drag Bobbi in for a confession. Judge Bea’s actions are supposed to be viewed as eccentric and roughish, I believe, but reads to me like a shocking abuse of power for which he should be removed from the bench. He treats the town and the subjects of the town as if he is the king and it is his fiefdom. I don’t find that even a little cute.

But the worst part of the book is the casual misogyny dresssed up in good ol’ boy pants. Bobbi is referred to as a Femi Nazi for saying that she’s can fend off unwanted advances on her own. Before she gets an argument out, however, Trey interrupts her.

“Lovely.” At least he didn’t pee on her. “How did I ever manage to fend off unwanted advances before you came along?”

“Probably by launching into some femi-nazi lecture.”

“I hate that term. Nazi isn’t a word you can just throw around, and it’s completely inappropr—”

“Thanks for making my point.” He took a chug of beer and licked foam off his upper lip. “More likely you’d sucker-punch the guy, like you did to me.”

This sequence is repeated throughout the story. Bobbi will try to assert some pro feminist stance and Trey will interrupt her with a good ol boy wink or witticism. Bobbi will shut up.

Bobbi just plunked her shopping bags into a nearby chair when she heard a familiar voice from behind.

“You gotta pretend to like ’em for their personality.” Bobbi turned and glared at her new friend—the one she couldn’t allow herself to touch.

“Actually,” she told the boy at Trey’s side, “it’s because women are more than just pretty faces or nice legs or big breasts. They’re more than the sum of their parts. They’re people with feelings and ideas, and they want to be respected. You remember that, and—”

“—and,” Trey interrupted, “you’ll score like Michael Jordan.” After a moment of thought, he added, “But remember to keep it wrapped.”

So yeah, all of those types of things pretty much ruined the story for me. The misogyny isn’t even addressed. Instead, Bobbi is made to look foolish for even espousing those opinions.   Besides the previous book’s heroine and her granny, nearly every woman in the book was portrayed either as a sex starved nymph, a crazed bimbo,  or a cheating whore.  Even the insults are gendered.

His already stiff smile faltered. “I’ll have a raspberry-ginger iced tea, sweetened with honey. Lemon wedge on the side.”

As much as I love the over protective brother scene, when Bobbi tried to tell her brother she was with Trey because she wanted to be with him, she was told to “get her shit” and go home.

Hey!” Bobbi stormed outside, pointing her black handbag at her brother. “I’m a grown woman, and who I bang is none of your business. We didn’t do anything wrong!”

With his good hand, Luke pointed to the house. “Just get your shit and go home. This is between me and him.”

Maybe the worst is that I think that this book is supposed to be about loving a woman for all she is – like Bobbi’s big thighs. Trey loves those. How about loving her for her mind t0o?   And that it’s okay for her to voice an opinion that might not be in concert with his. I think the book was even supposed to be progressive because there was a moment where a cameraman got pissed when Bobbi told him what to do and Bobbi thinks about how he’s not used to taking orders from a woman.

Also while a passing reference is made to the ethics of she, as the director, falling for the subject of her documentary, this provides zero impediment to their relationship. Why bring it up if it isn’t going to be a source of conflict? Second, there were authorial manipulations that ended up in inconsistencies. I.e. on Page 60, she says

““Hmm.” Bobbi tipped her head, studying him. “You guys are completely transparent. You’re afraid of commitment because you think everyone cheats,” then pointing to Colton, “and this one’s been hurt. Badly.””

“…Ah, that would be the pastor’s daughter. They had a thing in high school, and he never got over it. I guess being here stirs up too many old memories.”

“No way.” That didn’t sound like the Colton she knew, who probably didn’t recall the names of half the women he’d screwed. “You mean he actually has a heart?”

The sad thing is that the book is fairly cute and the romance is sweet between Bobbi and Trey but the  dismissive and condescending way Bobbi is treated for having an opinion was rage inducing.  I’m probably done with this series.  D

→ Jane
Previous article: REVIEW: Raid by Kristen Ashley
Next Post: Daily Deals: Hapless socialites from Manhattan to England, from the 1880s to the present time.