Lately, after enjoying A Chance Encounter very much and The Wood Nymph to a lesser degree, I've been spending some time reading more of your older traditional regencies. A Masked Deception is your first book. Here is a description of the novel taken from your website:

Margaret, the new Countess of Brampton, is a quiet, demure, dutiful wife by day, an alluring, masked charmer by night. Will Richard, Earl of Brampton, ever discover that the wife he is growing to love and the seductress he finds almost impossible to resist are one and the same? 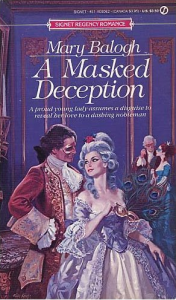 Margaret fell in love with Richard during a masked ball. He fell for her too, but never knew who she was and wasn’t able to find her again, and when they met unmasked he showed no attraction to her, so Margaret was afraid to reveal she was the one he'd once kissed. Still, several years later Richard proposes to Margaret due to family pressure, thinking she is dull and boring, because she has been behaving very properly in all these years. After the two of them marry, Margaret continues to behave quietly and demurely, while Richard keeps a mistress on the side.

Just when Richard calls it off with the mistress in order to devote himself to his marriage, Margaret's sister Charlotte talks Margaret into wearing a mask to Vauxhall Gardens and meeting her husband there disguised in her old Marie Antoinette costume. Of course, Richard recognizes Margaret as a the charmer he fell for years ago, but not as the woman he married, and begins an affair with his own wife.

Margaret fears discovery but keeps meeting her husband in secret because his lovemaking is so different when she is masked than it is in their marriage bed. He shows her a lot more passion and seduction when he sees her as his lover than when he sees her as his wife, and she does not know that this is because he believes his wife would not want that kind of attention from him.

There is also a subplot about Charlotte who is spending a lot of time with Richard's brother Charles. Charles has a fiancée he hasn’t told the family about, and he asks Charlotte to deter other young women from pursuing him. Unfortunately, Charlotte is in love with Devin, Richard's best friend, but Devin believes she is falling for Charles.

I thought this book had several problems. First, there was a flashback to Richard and Margaret's first meeting at the masked ball and almost nothing happened between them. A stolen kiss and a few sentences exchanged, but in my opinion it was not enough to explain why they couldn’t forget each other years later.

Second, while Margaret suspects Richard of keeping a mistress, she never learns the truth about it, so he is never confronted with his wrongdoing on that score. Margaret’s anger at Richard “cheating” and with her and the difference in his lovemaking only emerges briefly toward the very end of the story.

Third (the biggest problem of all to my mind), Margaret is a very passive character when it comes to her marriage. She only disguises herself at her sister’s insistence and she refuses to wear attractive clothing or style her hair around her husband, out of some principle I didn’t quite understand. Her two personas could have been more interesting had the way she repressed her lively side most of the time been explored in greater depth. But it wasn't, and instead Margaret just came across to me as insipid and even a bit foolish.

[spoiler]Fourth, there is a farcical, Heyeresque development near the end, with characters chasing each other under mistaken assumptions. This was pretty funny and I enjoyed it, but the tone of these scenes was so different from the rest of the story that it was also jarring.

Fifth, I didn't care for Richard's behavior near the end of the story. After learning that Margaret was his secret lover, he jumps to the wrong conclusion about her character and maintains this absurd belief until quite late in the book.[/spoiler]

One also has to suspend disbelief that Richard wouldn’t recognize Margaret's scent, voice or anything else about her while sleeping with her when she is in both of her roles, but I probably could have done that if not for all the other problems.

The subplot about Charlotte was entertaining, and as mentioned previously I did enjoy the farcical scenes toward the end of the book, but that just wasn’t enough for me. This is your first novel and I think that shows. I kept wanting to put the book down and in the end, and when I finished it I wasn’t sure why I had kept reading, or whether I had gotten anything out of the experience. Fortunately, many of your later books are far more accomplished, but A Masked Deception gets a D from me.