Sometimes good prose can transcend a bad plot or trite circumstances but not always and not in the case of A Highland Duchess.   While I’ve enjoyed Ranney writing in the past and have spent my wallet silly on the recently released backlist titles, the strained plot contrivances and the heavy handedness in character portrayal rendered the reading of this book a frustration 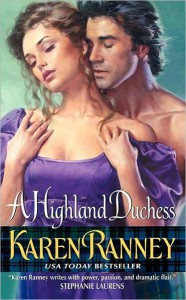 The Duchess of Herridge suffered a terrible, degrading marriage to Anthony, Duke of Herridge, for four years. She’s been widowed for 18 months and working hard to act with propriety believing that a life of certitude will be her entree back into society.   She’s known as the Ice Queen, a epithet whose full meaning isn’t explained until over half of the book is over.

Ian, Earl of Buchane, Laird of Trelawny, a scientist, sneaks into Emma’s room one night and demands the return of the Tulloch mirror.   This mirror is almost a MacGuffin in the story as the mirror’s importances waxes and wanes with the need for conflict and tension. (and in reading the wikipedia article, it is a MacGuffin because it is important in the very beginning and wanes in importance as the story proceeds, to be nearly forgotten in the end).

In the opening of the book, the mirror must be wildly important that an EARL! an SCIENTIST! breaks into the Duchess’ home to steal it.   When she refuses to give it to him, he abducts her.   Later, it is of no import when Emma is to be returned to her home.   Quote from the book:

“It no longer matters, Emma.”

I never knew that one of the core competencies of a scientist was breaking and entering.   Yes, granted he abducted Emma because he was on the verge of being discovered in her bedroom but it’s obviously just a contrivance to get them to his home in London where they will be isolated and ready for the sexy times.

All we know of Emma, initially, is that she was sorely used by her husband, probably in some horrible degrading acts, that she feared and loathed him. Yet, despite her only intimate contact with a man being one of horror and pain and degradation, when she is abducted from her home by a man demanding a certain mirror, she feels possible attraction.   Then, once a prisoner in his home, she is spilling some of the most intimate details of her marriage to this stranger and  ends up having wild, passionate sex with him.

This is a technique used over and over again and I don’t really understand it.   Being abducted by another man somehow stirs the passions of a sexually abused woman?   How am I supposed to believe this?

There are more unbelievable things I am expected to just swallow.   At one point, Emma thinks to herself that a character did something that she couldn’t believe, thinking that the action was “one of those facts she could not quite grasp” and all I could think of was, me neither sister.

I also couldn’t really grasp the concept of Ian as an honorable man.   In the beginning, Ian admits he is betrothed yet he has no problem seducing Emma and Emma, who has lived with the most licentious beings of all time and seen the most base activities and who is trying to be a pattern of rectitude gives no thought to sexy times with someone else’s betrothed.   She even has the gall to refer to his honor and how different he was from her dead, dastardly husband.

AND! God, there were what seemed to be five thousand explicit contrasts drawn between Ian and Anthony.   Ian was good, Anthony was bad. I figured that out from the very beginning, I didn’t need the map drawn in red ink with exclamation points at every tiny curve in the map.   Ian was springtime and Anthony was moldy undergrowth.   Ian was warm puppies.   Anthony was a diseased roach.   Etcetera. Etcetera. Etcetera.   But Ian wasn’t really that honorable of a character.   First, he cheats on his betrothed.   Then when he is free to love Emma but Emma isn’t free to love him, he keeps pressing her and pressing her in spite of her desire to be respectable.

Then there were the inevitable and unfortunate plays on the Ice Queen appellation.

I really, really hated the Ice Queen bit.   I didn’t like how it was revealed so late.   I didn’t like what it actually represented.   I didn’t really understand why Emma worried so much about acceptance when she had seen so many people in society engage in embarrassing activities that they would not want made public.   She held a lot of power over these people, yet was written as if she had no power, as if she were the supplicant.   It was strange and felt very unauthentic.

The last third of the book gripped me as I tried to set aside the silliness that preceded it.   Taken at face value, the forbidden love between Ian and Emma was moving, especially toward the end.   But most of the book was either awkwardly constructed or done with such a heavy hand that I could not lose myself in the book.   D

→ Jane
Previous article: REVIEW: A Kiss at Midnight by Eloisa James
Next Post: Friday Film Review: Last of the Mohicans