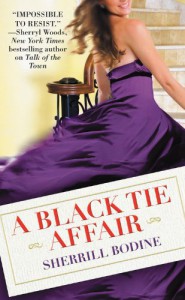 A Black Tie Affair begins a series about the Smith sisters who are famously as beautiful as the “Cushing, Bouvier, and Miller sisters.” The Smith sisters have had a long history with the Clayworth’s of Chicago, the last event being the hasty termination of their father, former treasurer of the Clayworth department store. There are rumors that Mr. Smith was let go because of something shady and this only serves to foster negative feelings by the Smiths toward the Clayworths, or so we are told.

Athena Smith fell in love with Drew Clayworth and he with her. When his parents died in the Fastnet sailing race, Athena was there for him. Drew felt that Athena had betrayed him and their relationship ended. With hurtful words, Drew drove Athena away and they have remained separated for fifteen years.

Despite the way in which their lives have been intertwined, Drew and Athena have had no real contact with each other until Athena is given the opportunity to do provenance for four vintage gowns owned by a Clayworth matriarch. Unfortunately when she goes to inspect the gowns, Athena is exposed to some kind of neurotoxin that acts as a truth serum. Athena claims that she has the requisite expertise to hunt these gowns down because only she knows the dedicated collectors in Chicago. This places Drew and Athena together for the first time in fifteen years. Yes, I find this to be implausible, but the entire story is kind of thin and ridiculous so what’s a few plot holes?

The mystery of the neurotoxin is never resolved. Everyone who comes into contact with the dress confesses their true feelings of love and this leads four lovely reconciliations (am being a bit sarcastic here) or five if you count Drew and Athena. Apparently the neurotoxin affects you only if you touch the dress, but not if you are near it. Athena becomes an expert in handling biohazardous gowns (plastic bags and gloves folks!).

This is a very fluffy story. There is no character growth. The plot is thinner than tissue and the excuses that have kept the two apart is embarrassingly simplistic. We end up getting a ton of details about things that have little to do with advancing the story and a lot to do with the city of Chicago and the history of the Clayworths. If only a tiny portion of that time was spent making Drew and Athena three dimensional. The story relies heavily on the quirkiness factor but even quirky stories need some substance.

The ultimate reveal of the betrayal was such a let down. This “thing” that drove Drew and Athena apart when they were teenagers was a totally immature event and Drew’s hanging on to this and failing to understand Athena’s reasoning is a joke. These sorts of statement in retrospect sounded ridiculous “Trying like he had a hundred times before to understand why she’d betrayed his trust.” Drew must be the stupidest man alive. At least he is lacking the requisite intelligence to run a major business.

I think the story is supposed to be written in an over the top farcical way but there wasn’t anything humorous about the writing. I would say I found the characters to be dull but that presumes I’m shown anything about the characters, which I am not. Other than they are stupid.

Is there conflict? Not really. The two don’t really fight their feelings for each other despite the purported betrayal. I’ve seen more drama and conflict in the diorama of barbies. The one good thing I can say about this non story is that it is short. It is only 226 pages long. D

This book can be purchased at Amazon (Affiliate Link), in Kindle (non affiliate link), or other etailers.