Thanks to a friend, I got to read your ebook all about twin wizards, princess consort of same, a dragon (thank God he’s not in on the sex part) and magick. Not magic, mind you, but magick. Blue green magick that erupts whenever the twin wizards and their princess consort get nekkid and boink. What was I thinking? 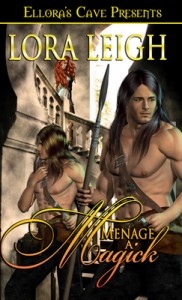 OK, so you’ve got us on some world that has male wizards and female magick people and they need each other for completion of their magick and to keep it from fading away BUT over a millennia ago, they stopped Joining and ever since things have been going downhill and the lowly humans are maneuvering into power. It cannot be allowed to continue! So, these hunky male wizard twins approach the Queen and ask to Join with one of her daughters, Brianna, who is sort of ordained for them.

Queen agrees but Brianna balks.– Oh, no! I know what happens when a female mates with two wizards. I will be torn apart when you both stick those HICs in me. Nuh-unh, ain’t gonna happen!

The Queen, the Dragon (who caught Brianna looking at the illustrations in the naughty Forbidden Books) and the Wizards all try to persuade Brianna. Brianna won’t be persuaded. — Noooooooooo! No, no, no, no, no!!!!!!!!!!!!!! (Lots of foot stamping and vows that she won’t give in, ever!). I hate twitty heroines.

You then make these Wizards willing to force the issue if need be. Heroine is seen as silly, virginal twit with Irrational Fears. Give in to us — say the twins. You are our soulmate. We will give you sexual pleasure unimaginable. NO! – says Brianna (about 452 times give or take a dozen).

Meanwhile, humans are trying to kidnap Brianna and destroy her power before it can be strengthened by her Joining with the twins. Wizards hear her cry for help and rescue her. They all bath in pools of liquid silver to heal Brianna which makes them even hornier. You must give up your silly female fears and Join with us – they say (for about the 567th time give or take a few). Brianna refuses. Again. But what did I expect by that point?

Issues have come to a head. The Joining must take place regardless of Brianna’s silly, maidenly fears. Full speed ahead – say the wizards and get down to business. They wow Brianna with some good luvin’ and finally (!) Join! Blue green magick explodes and erupts all over the place. Looks like the Fourth of July. Wow – says Brianna. That was fun. The wizards look smug and smirk a lot. God I hate smirky heroes.

One thinks Brianna is tamed (he said that) and that all she really needed (and needs to be kept in line) is lots of good f**king. Other twin isn’t so sure but still enjoys the boinking. Aaarrrggghhh.

Two months later…..heroine still acts like silly twit, stamping her feet and throwing things. Twins are still divided over best way to control her but lots of hot menage boinking still taking place when Brianna hasn’t thrown them out of her bed. There is some silly bit about an ex-human mistress of one of the twins (the F**k her into submission one) who is plotting to bring the humans to power that gets taken care of in two paragraphs and it’s back to more sex.

Then…you begin to set up your next book about the heroine’s wounded sister who also needs to Join with two other wizards. Wait…didn’t I just read that? Can’t you come up with a different plot?

You really seems to have a thing for brothers getting it on with the heroine. And you make this heroine sound like an idiot. Over and over again. Just some stupid little moron who needs to be controlled by the big strong heroes (with HICs) for her own good as well as the good of the world. Lots of smug and superior males telling all the women of this world to just give in like good little girls because the men know best. Ugh! Oh, almost forgot, for those readers who hate the word too, you used orbs in the story. Your world building was perfunctory (use misspelled words like magick and apostrophes in the names and voila you have a distant planet far, far away).

I’m really glad I didn’t pay anything for this and probably wouldn’t read another book by you but I had fun laughing at some of it. When I didn’t want to bitchslap the heroes, that is. D