As we move farther and farther away from the origins of romance, I find myself growing nostalgic.  There were some great books published decades ago (and some terrible ones). I thought it would be great if our community of romance readers and authors could offer up some reminisces themselves to a collection of classic romance reviews.

The invitation is open to anyone to write a review of a book that is at least twenty years old, published in the 1990s or before. You can love it or hate it but it stuck with you for a reason. Share with the rest of us your classic romance review by emailing jane@dearauthor.com

Our first entry is from Vintage Reader. You can find her on her Twitter feed here.

Molly B., known on Twitter and formerly in the blogosphere as The Vintage Reader, has been reading vintage romance since her best friend introduced her to the works of both Grace Livingston Hill and Jennifer Wilde in the fifth grade (although Jennifer Wilde was contemporary at the time). She is occasionally startled to realize that the Loveswept books she bought new in the 80s are now vintage.

Lynn Harding, a bright young woman of 22, loves her job researching sales leads for a bank in the heart of a New York skyscraper. She lives in a club for businesswomen, saves her money, and dreams of advancing in the bank. Then one morning, eating breakfast in the building’s first-floor diner, she meets co-worker Tom Shepard.

Lynn and Tom hit it off quickly, but run into trouble when they decide to get married: Tom doesn’t want his wife to work, but can’t swing a household on his $50-a-week salary. Tom and Lynn find it hard to resist temptation, especially after Lynn moves out of the highly supervised club and into an apartment with her friend Jennie, a couture model who also works in the skyscraper.

Tom finally agrees to let Lynn continue working after marriage, but then a new problem crops up: Lynn finds out that her bank is firing married women, because it’s 1931–the beginning of the Depression. Yet another problem comes along in the form of a wealthy older man who sets his fedora for Lynn. “All’s fair in love and business,” he says, and goes about showing what he means.

Can love and business co-exist? Lynn and Tom will have to find out for themselves. 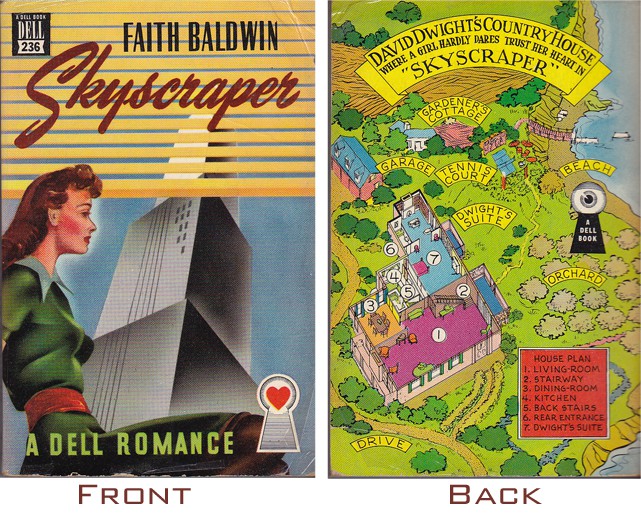 Dear Miss Baldwin (as you were referred to on your book jackets, although in real life you were Mrs. Cuthrell),

I first discovered you in 1979, when I came across a copy of The Incredible Year in a Dell edition with an intricate map of New England on the back. It was that map that drew me in, and led to more than 30 years of collecting not only your books, but also other Dell mapbacks–paperbacks with maps on the back that featured crime scenes, floor plans, and glamorous locales I could only dream of visiting someday. Inside your books I found an equally compelling picture of 1930s New York–full of plucky career girls and indolent playboys, caring-but-clueless rich people and sensible spinsters. The conversations were lively, the settings elegant, and the clothes–oh, the clothes! I dreamed that when I grew up I would live in New York and wear a smart dark-green wool suit with a made-to-match hat when I lunched on Fifth Avenue, just like Julie in The Incredible Year, or a cute Alpine sweater and little felt beanie when I went away for a ski weekend, like Cherry Chester on the cover of The Moon’s Our Home (well, okay, maybe I’d skip the beanie).

Because of course, your characters did things like that. They mostly lived in New York, so they lived in brownstones or walkups and they rode the subway or occasionally took a taxi, and they went to movie houses and supper clubs and also, I assume, speakeasies, since your early books take place during Prohibition. It was all very romantic to a 13-year-old who had rarely been out of Tulsa. I’m sorry to say that I often found your heroines a little too perfect, your heroes a little too boring… but I fell hopelessly in love with your New York.

So of course I snapped up Skyscraper when I found it. It’s probably the best-known of your books these days; not only has there been a recent paperback reproduction featuring the nearly iconic Earl Sharwan cover art for Dell–which shows a woman and a building, and notably, no man–there’s also been a reprint with a new cover by a feminist press. When Jane put out the call for reviews of classic romance, Skyscraper was one of the first books that came to mind, so I found it on my shelves and read it again to see if it was as good as I remembered.

It wasn’t; and yet, it didn’t disappoint. The dialogue is snappy, especially Jennie’s slang-laden speeches that sometimes contain racial slurs or various types of innuendo (no n-words, but I still can’t bring myself to type what Jennie calls the maid).

I note that although Jennie is not alone in using anti-gay language, she is the only one who uses race-related words. It seems to me that in your books, racist language is used to make a point about the character using it. That’s why I’ve never bought into the excuse, so often given for vintage books and elderly relatives, that everybody used such language back then. Because as far as I can recall, your “good” heroes and heroines don’t use it. (Stereotyped dialect is another matter, but I’ll address that when I write to you about District Nurse.)

As characters go, I like these. Lynn is awfully perfect, with her “satin cap” of dark hair–you mention that several times–and her unwavering business ethics, but I like her because she doesn’t ever judge her friends, whether it’s Jennie’s attempt at gold-digging, Mara’s giving up her job to follow a faithless husband, or Sarah’s youthful affair. I think Tom is one of your most interesting and likable heroes, although his tendency to fly off the handle is annoying. It is nice that he learns to control it by the end of the book, at least. Jennie is a fabulous character, far more complex than the typical Bad Girl With a Heart of Gold. David Dwight, on the other hand, is fairly tepid–not appealing enough to be a real threat to Tom and Lynn’s relationship, but not evil enough to be a very convincing villain. In one scene, he actually shows Lynn his etchings, which was already a cliché by 1931 (according to Wikipedia, a resource that would have saved you a lot of trips to the library–not that I think that’s necessarily a good thing), so I’m guessing you meant that as a joke about his character. Rest assured it stands the test of time.

The clothes are, as usual, beautifully described, and a search on Pinterest (another time-saver in 2014, although I suspect you’d see it as more of a time-waster) yields all sorts of lovely pictures of clothes and hair just like Jennie’s and Lynn’s.

Your descriptions of the city, the office, and everyone’s apartments are so thorough they make me feel like I lived through the Thirties in New York–but the attitudes you write about make me glad I didn’t. I think you might be happy to know that modern men don’t usually mind if their wives have jobs, but I think you might be sad to know that women still make less money for the same work, just as Lynn makes $1900 a year while Tom makes $2600 for what seems like a less demanding job, and certainly one that he doesn’t care about or enjoy as much as she cares about and enjoys hers. I think you might also find it distressing that American society still often judges women harshly over the choices they make in their relationships; while that theme is not as strong in Skyscraper as it is in some of your other books, your heroines don’t seem to have any use for what we now call “slut-shaming.”

Occasionally the plots of your books revolve around conflicts that those of us living 70 to 80 years after your heyday have a difficult time relating to. We modern readers often roll our eyes at Romeo-and-Juliet-style parental objections or easily resolved misunderstandings. While it’s true that the biggest conflict between Lynn and Tom is one of the latter (over, of all things, insider trading), it at least makes sense. Perhaps that’s why Skyscraper has survived while many of your other books have not. Although that knockout cover doesn’t hurt.