For those new to this site, every quarter we host publisher sponsored giveaways wherein publishers give away books in exchange for the opportunity to tell you a little bit about their upcoming titles.   This giveaway features books from Ace and Roc.   Ace and Roc publish primarily science fiction and fantasy books but with the crossover genre going strong, readers of romances have been glomming onto these fresh titles.   Anne Sowards provides the books from Ace and Roc.   Take a look at the preview and then at the bottom of the post there will be instructions on how to enter for a free book.

Welcome to Ace and Roc's fantastic forthcoming winter books preview and giveaway. We've got a lot of great books to talk about (and give away), for your holiday reading !

Thanks again to Dear Author for giving me this opportunity to let you know about some of our terrific upcoming titles. As always, there are too many great books for me to mention all of them, so you can look at our site (http://us.penguingroup.com/static/pages/specialinterests/scifi/index.html) to see everything we publish. 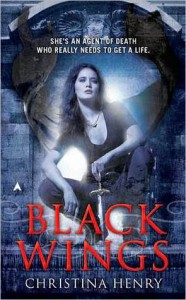 December is a great month for urban fantasy this year at Ace and Roc, with not one but two brand-new series launching. BLACK WINGS is about an agent of death, Madeline Black, who is responsible for escorting the souls of the dearly departed to the afterlife. It's a 24/7 job with a lousy benefits package. Maddy's position may come with magical abilities and an impressive wingspan, but it doesn't pay the bills. And then there are her infuriating boss, tenant woes, and a cranky, popcorn-loving gargoyle to contend with. Things start looking up, though, when the tall, dark, and handsome Gabriel agrees to rent the empty apartment in Maddy's building. It's probably just a coincidence that as soon as he moves in, demons appear on the front lawn. But when an unholy monster is unleashed upon the streets of Chicago, Maddy discovers powers she never knew she possessed. Powers linked to a family history of tarnished halos- 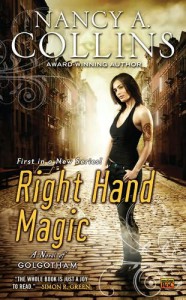 Nancy Collins's name may be familiar-‘she's written a number of other fantasy and horror novels, and is best known for her groundbreaking vampire character Sonja Blue. With RIGHT HAND MAGIC, she begins a new series set in a neighborhood of New York City that's home to some very unusual beings. Like most Manhattanites, aspiring artist Tate can't resist a good rental deal-‘even if it's in the city's strangest neighborhood, Golgotham. For centuries werewolves, Valkyries, centaurs, and countless other creatures have crowded these streets. Tate's new landlord is a sorcerer-for-hire named Hexe. Despite being the son of Golgotham's Witch-Queen, Hexe is determined to build his own reputation without using dark Left Hand magic or his mother's connections. As Tate is irresistibly drawn into Hexe's fascinating world, they both find out that the right hand does not always know what the left hand is doing. 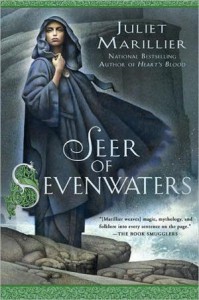 SEER OF SEVENWATERS by Juliet Marillier

It's always a treat to return to Juliet Marillier's gorgeous world of Sevenwaters. Juliet is known for historical fantasy with a beautiful love story, and SEER OF SEVENWATERS does not disappoint. It's the story of Sibeal (the sister of Clodagh, the heroine in HEIR TO SEVENWATERS). Sibeal has been studying to be a Druid, but when she spends the summer on the island of Inis Eala, home to elite warriors, she meets Felix, the survivor of a Norse shipwreck with no memory of his past. As the island's healers struggle to keep Felix alive, he and Sibeal form a natural bond. He could even be her soul mate. But Sibeal's vocation is her true calling, and her heart must answer. As Felix fully regains his memory, the ugly truth behind the shipwreck and the island that the ship came from is revealed. In a runic divination, Sibeal is shown that Felix must go on a perilous mission-‘and that she will join him. But the rough waters and the sea creatures they will face are no match for Sibeal's own inner turmoil. She must choose between the two things that tug at her soul-‘her spirituality and a chance at love- 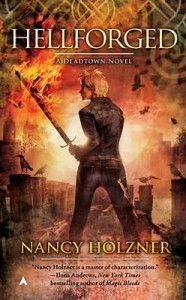 HELLFORGED is the sequel to last year's urban fantasy debut, DEADTOWN, featuring shapeshifter Victory Vaughan, professional demon-slayer and dreamwalker, who keeps Boston safe from nightmares of all shapes and sizes.

After Vicky banished her demon nemesis to the fiery depths of Hell, she thought life would return to normal. But considering she has a werewolf lawyer boyfriend, a zombie apprentice who's angling to become a pop star, and an eccentric vampire roommate, what’s normal anyway? Then the supposedly banished Hellion starts to trespass in Vicky's dreams-‘just as several of Deadtown's zombies are viciously attacked and become really dead. When Vicky realizes she is the only connection between the victims, she suspects that the demon is somehow working through her dreams to become Deadtown's living nightmare. 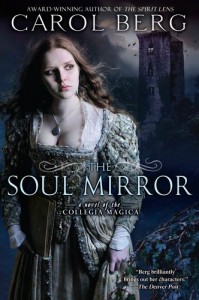 THE SOUL MIRROR by Carol Berg

This is the next book in Carol's Collegia Magical trilogy, a complex and character-driven fantasy set in a kingdom on the verge of a renaissance, where natural science has supplanted sorcery. Each book has a different narrator, which I've been enjoying tremendously. It's fascinating to see how the narrator of THE SOUL MIRROR views Portier de Savin-Duplais, the hero of THE SPIRIT LENS (hint: she doesn't like him very much).

Anne de Vernase rejoices that she has no talent for magic. Her father's pursuit of depraved sorcery has left her family in ruins, and he remains at large, convicted of treason and murder by Anne's own testimony. Now the tutors at Collegia Seravain inform her that her gifted younger sister has died in a magical accident. It seems but life's final mockery that cool, distant Portier de Savin-Duplais, the librarian turned royal prosecutor, arrives with the news that the king intends to barter her hand in marriage- Vampire hunter and skinwalker Jane Yellowrock is back in the sequel to urban fantasy BLOOD CROSS. Things are heating up in the Big Easy. Weres have announced their existence to the world, and revived the bitter tensions that run between them and their old enemies: vampires. When Jane is attacked by a pack of marauding werewolves, she is thankful for the help of a mysterious stranger named Girrard. He explained that he used to be the "Mercy Blade," a sacred position charged with killing vampires who have gone insane. What Jane doesn't know is why this powerful assassin left New Orleans-‘or more troubling, why he's now returned. It's definitely not to make Jane's life easier.- 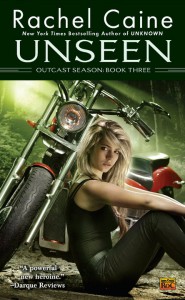 This is the next book in Rachel's Outcast Season series, set in her Weather Warden universe, but from the point of view of one of the djinn. And not just any of the djinn, but Cassiel, one of the most powerful (and aloof). But when she defied her ruler, she was cast out and forced to take human flesh as punishment. Becoming mortal really puts Cassiel into culture shock, especially when she starts falling for a human-

All over the world, young Wardens are showing their potential far too early. And a maniacal Djinn-‘aided by her devoted followers-‘is snatching the children seemingly at will and indoctrinating them, so she can use their strength for herself. With no other options, Cassiel infiltrates the Djinn's organization. Deprived of the ethereal gifts allowed her by the Wardens, she soon begins to question her own ideas of right, wrong, and true power. But if Cassiel cannot stop the Djinn's apocalyptic designs, all of humanity may be destroyed-

Here's what we're giving away:

The Dark Griffin by K. J. Taylor (three advance reading copies-‘this is a new traditional fantasy series I'm throwing in for the full on fantasy readers out there. Not much in the way of romance, but it's got griffins, adventure, and turns fantasy tropes on their heads in a fresh and unique way that will have readers cheering on the dark side.)

Anne Sowards is an executive editor at Penguin Group (USA) Inc., where she primarily acquires and edits fantasy and science fiction for the Ace and Roc imprints. Some of the great authors she works with include Jim Butcher, Patricia Briggs, Anne Bishop, Ilona Andrews, Karen Chance, Jack Campbell, and Rob Thurman. When she’s not reading, she listens to Chinese rap and spends way too much time playing video games. Follow her at http://twitter.com/AnneSowards.

So here is how to enter. Simply leave a comment about what you would MOST like to receive as a present this holiday season AND the book that you would most like to receive out of the titles listed in the above giveaway.   As an added treat, anyone who comments on this post and the Berkley giveaway next week, will be entered to win a Kindle 3G wifi (est. retail value of $139) as a gift from Dear Author.   We will close the comments on Friday at 7 pm CST and the winners of the book giveaway will be announced on Saturday.   The Kindle winner will be announced on the 18th and hopefully the winner will receive it before Christmas (unless you live outside the US then I am shipping it the cheapest way possible.   Good luck!)