An account of the infamous Levy bus tour by author Sherry Thomas who penned the fabulous historicals, Private Arrangements and Delicious.   We, here, at Dear Author find Sherry’s books to be delicious themselves.   You can check out excerpts at the links previously provided or read our reviews here.

Six months ago I received an e-mail from my editor telling me that Bantam Books, my publisher, would like to send me on the Levy bus tour 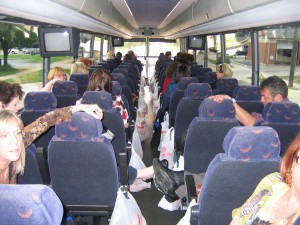 Was I interested? Heck, ever since I read Jacquie D’Alessandro’s account of her tour experience, I’d had it on my list of good things that I want to happen to me. I said yes right away.

For readers who are unfamiliar with the distribution end of the publishing business, Levy Home Entertainment is one of the largest book distributors in the U.S. and specializes in supplying books and book-related services to nontraditional outlets such as Target, Kmart, Meijer, Wal-Mart, Toys R Us, etc. If you neighborhood grocery store or drugstore has a few book racks, Levy might also be involved: Levy works with magazine wholesaler Source Interlinks in shipping books to Albertson’s, Kroger, and Walgreen stores, among many others.

Every year Levy organizes a bus tour that stops at one of the chains it supplies. Kmart and Wal-Mart were recent tour sponsors. This year, the tour sponsor is Meijer, a midwestern chain of hypermarkets that I used to frequent when I lived briefly in Detroit as a teenager.

And So It Begins 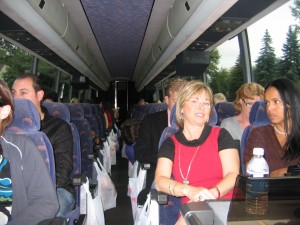 The tour began with an orientation at the Detroit Metro Airport Westin. I kid you not when I say it is one lovely hotel, with a gorgeous grove of very tall bamboos in the atrium and quiet, comfortable rooms. (I met Elizabeth Hoyt for the first time when she came out of an elevator looking for her room.)

The orientation took very little time, most of it spent on going-around-the-room self-introductions. There were twenty-seven authors in all-‘the largest number ever for a Levy tour. The majority wrote some flavor of romance/women’s fiction, with a flavoring of inspirationals, thrillers, and memoirs thrown in. And yes, there were three gentlemen.

At the orientation there was a very low-key African American lady, quite beautiful even without any makeup. I kept looking at her. Finally, at dinner, I couldn’t suppress my curiosity any more.

"I’m sorry for staring at you," I said. "But you look exactly like Drue from The Young and the Restless."

She smiled a little and said, "I am she."

Wow, she is Victoria Rowell, author of the memoir THE WOMEN WHO RAISED ME, and my first real-life celebrity encounter. 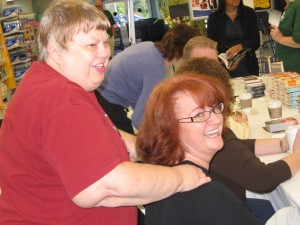 We signed at nine Meijer stores in three days, sometimes we were put along an aisle, sometimes in an event area, and when we were really lucky, at the front of the store.

There were some terrific fans who came. At our first signing, in Kalamazoo, Michigan, as soon as we sat down, a Roxanne St. Claire fan arrived with a present, a children’s book on Kalamazoo for Roxanne to keep as a memento. On Saturday there were superfans giving neck massages to Allison Brennan, Brenda Novak, and Leslie Langtry. On Sunday, a Jordan Dane fan gifted her with a humongous platter of homemade cookies.

There were fans who came with their own copies of books to be signed and readers who were curious enough to pick up a new author they’d never read. One of my favorite was a young lady who’d been brought by her proud father. She wants to write and loves to read, so her dad walked with her from the beginning to the end of the line of authors, picking up a book from everyone. Another, also a set of father and daughter, drove in from Bowling Green State University where she is a grad student in the Popular Culture program, specializing in romance. 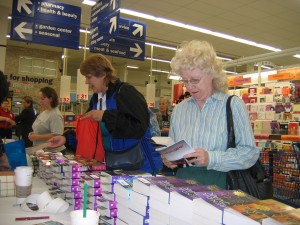 Before the tour, my husband, in one of his flights of fancy, pictured the book signings as fish markets, and us hapless authors as fishwives shouting at passersby to try our merchandise. At the time, I laughed at the idea. But as it turned out, he was not too far from the target. We did have to pitch the books to the readers who stopped to browse.

The best one-on-one marketer of the group was probably Jade Lee, who acted out the hook of her latest release for every interested reader-‘"So there she is, standing in this old Norman church, about to get married, when a stranger in a saffron robe comes running down the aisle, shouting, "I’m sorry! I’m sorry I’m late. But I’m here now and we can get married.’ And it turns out he is the long lost earl, everyone thought he was dead, but he’s just been busy in China learning martial arts!" Jade sold a book to just about everyone who stopped at her table.

The most innovative marketer had to be Sophia Nash. At one stop, when things were getting a little slow, she took signed books from everyone, put the books in a cart, and sallied forth to the vegetable section. And wouldn’t you know it, she sold three historical romances to one shopper and returned triumphant.

Me, I learned that I have no integrity whatsoever. When a reader is interested in a hot read, why then, I write double-strength smut. But 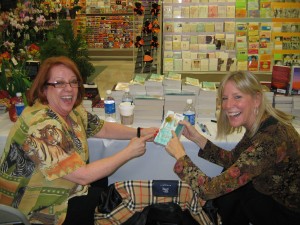 when a reader doesn’t want a bangfest, then I tell them the back copy pushing "teh sexxai" is a pack of lies, and that my book is about far more than a man and a woman: It’s about siblings, and mothers and their children, and every human experience and emotion imaginable!

The most fun, however, is selling other author’s fish books. Do you know, gentle reader, that Kristan Higgins just won the romance equivalent of an Oscar? You like paranormal? Then you’ve gotta try Jessica Anderson’s story based on Mayan mythology. You like hot? Ooh, go over to Angela Knight and prepare to burn, baby, burn.

Cherry Adair tells the most outrageously hilarious stories. Ask her about the platter-sized spider next time you see her. Kresley Cole, Gena Showalter, and Roxanne St. Claire kept the back of the bus roaring laughter for much of the trip. Kathryn Caskie’s boyfriend sent red roses to her hotel-‘and she looks like she should be on the front cover of a fashion catalogue. 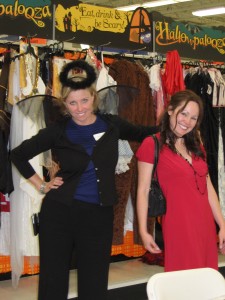 I had the pleasure of practicing my rusty French with the always elegant Sophia Nash, who is half French and very fluent. Elizabeth Hoyt and I talked shop as fellow relatively-new authors. And it was very affirming to talk to Kristan Higgins, who calmly breaks quite a few rules in crafting her warm, charming books.

I didn’t want to leave. It was fun to meet readers–I met five of my MySpace pals. It was educational, inspirational, and often side-splitting be surrounded by my fellow authors. And it spoiled me completely to have my needs taken care of at all times by the hard working folks at Levy-‘and they never once complained about herding cats.